Land O'Lakes Is Removing the American Indian Woman. Political Correctness or a Move That Gives More Credit to Farmers? 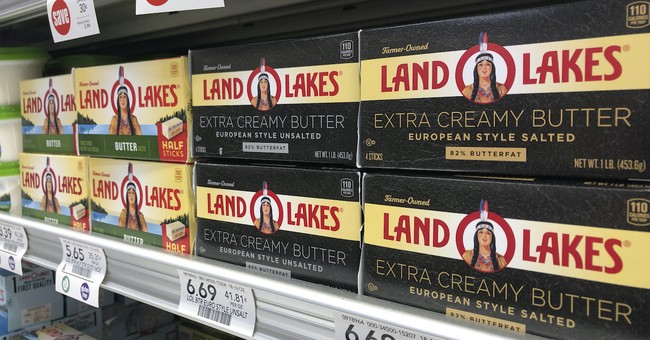 In the Left’s war on reality, not even butter is safe. There has been a slew of moves that are grounded in political correctness. The bars on the animal crackers boxes were removed is a prime example. Now, Land O’Lakes is removing the American Indian woman from its packaging. No doubt part of it is grounded in social justice warrior nonsense, but the company also says this move is being done to refocus credit to the company’s farmers-owners (via The Hill):

After nearly a century, Land O'Lakes butter is removing the Native American maiden from its packaging https://t.co/hPBb6GHVgX

The press release announcing the change was originally issued back in February.

With the same yellow background framed by trees and a lake, the new butter package has the term “Farmer-Owned” above the brand name and is now without the controversial Native American maiden in the center.

“As a farmer-owned co-op, we strongly feel the need to better connect the men and women who grow our food with those who consume it,” Ford reportedly said. “Our farmer-to-fork structure gives us a unique ability to bridge this divide.”

The Native American woman had long been viewed by critics as cultural appropriation and insensitive toward tribal communities.

American indigenous academic Lisa Monchalin wrote in her book “The Colonial Problem: An indigenous Perspective on Crime and Injustice in Canada” that the Land O’Lakes woman was an example of the romanticized and sexualized construction of indigenous women.

Uh, well, I think looking at the Land O’Lakes Indian as a sexual figure goes a bit far. No one thinks like that about the Indian woman. Only those who overanalyze and come up with the precisely wrong conclusions like they do in liberal academia can think that some butter lady is a sexualized construction. Seriously, I want to know how many people avoid buying Land O’Lakes because the Indian woman is pornified on the cover. In this era, I’ll always be skeptical of companies who change logos because the outrage machine is organized and effective. If this is done truly to credit more farmers, then God bless—truly. But I think this was done to satisfy a certain group of people.

Now, if the logo was changed to this, I wholeheartedly endorse it:

I guess that new logo is fitting pic.twitter.com/H2acuoMuIf