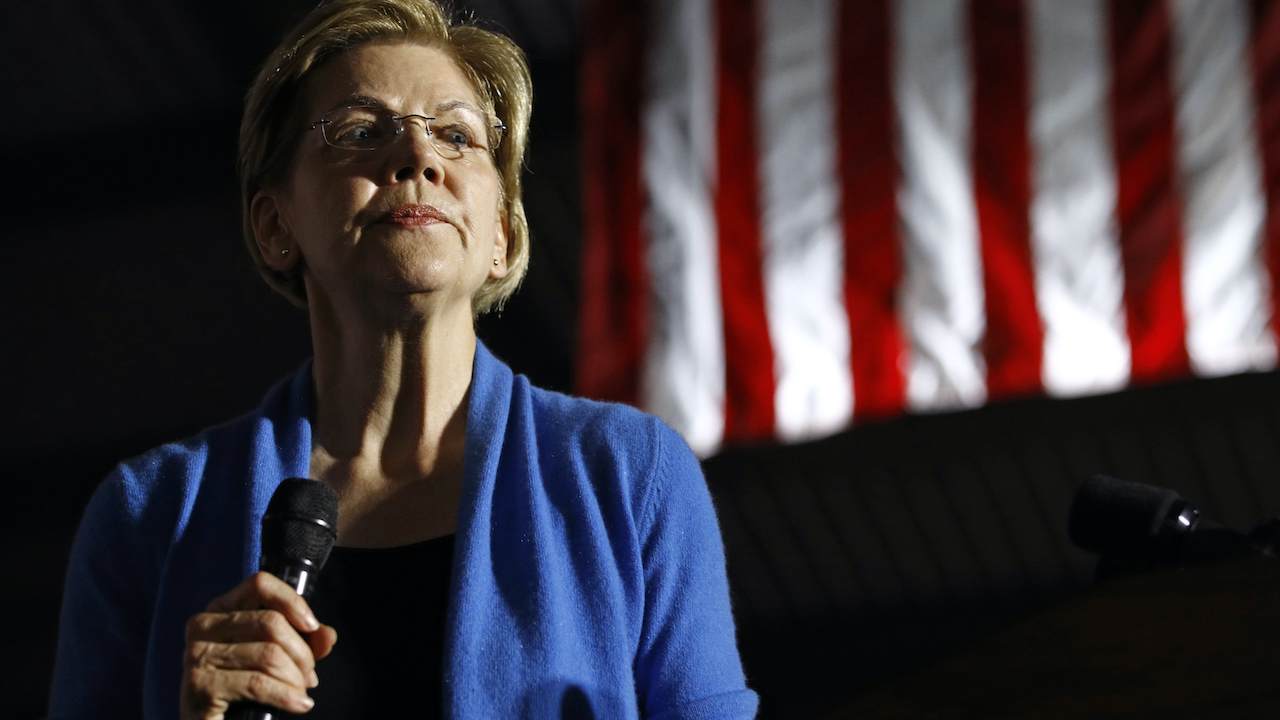 Sen. Elizabeth Warren (D-MA) is finished. She's done. Gone. Poof. Into the wind—and never to come back until the next presidential election (maybe). Warren is one of the darlings of the far left of the Democratic Party. The problem is that she had to share that wing of the party with Bernie Sanders, whose supporters were more rabid and greater in number. For better or worse, Bernie resonated more with the progressive wing of the Democratic Party. Warren's candidacy was always a rocky one. For starters, there is no doubt she would have done well with those in the club, the urban elites that dominate the urban cesspools of America. But that's not enough to win an election. In some states, it's barely enough to win statewide. These folks, these hyper-left-wing hyenas are not the majority. And they're certainly folks who you do not want to be friends with; they're snobby, condescending, and think anyone who isn't like them is trash. To put it bluntly, they hate America and anyone who doesn't agree with them. The fact that Warren couldn't connect with folks outside of this slice of America was immensely problematic.

Second, being that her main base of support were these urban leftists, her agenda mirrored that—and it was immensely unpopular. Take free college, for example. As we've noted in other posts, this is a good card to play if your intention is to usher in another Trump-like presidency. The populist backlash would be immense—and rightfully deserved. You have a large swath of people who have just paid off their loans but are told to screw off. Those who have saved for their children's higher education wouldn't benefit. The video of the angry dad yelling at Warren over this policy was just a window into the anger this policy would cause. Also, no one really cares about this, which is what James Carville, who is as liberal as they come, was warning his party about prior to Super Tuesday. The Ragin' Cajun was literally firing off all the warning flares about the left-wing nonsense that's distracting his party from getting their act together. He also noted the appalling smugness that's inherent within the Democratic Party, partially due to the fact that these urban-based elites have taken over the party.

"Democrats talking about free college tuition or debt forgiveness. I'm not here to debate the idea. What I can tell you is that people all over this country worked their way through school, sent their kids to school, paid off student loans," he ranted in an interview with Vox. "They don't want to hear this s**t."

Third, and possibly more to the point, was Lie-a-watha's health care policy. I mean what crack do you have to smoke to think this was a good idea? First, like Bernie Sanders' plan, it rips away health care from 150 million Americans, including union households. Second, it costs somewhere in the $50 trillion range over the next decade. And third, Warren is going to do this and free college and student loan forgiveness without raising taxes on the middle class? Yeah, when it comes to honesty, integrity, and authenticity, Warren is scalped on all three. Are you nuts? Even the most ardent leftist knows that none of this can be promised without massive tax increases on everyone.

Sen. Elizabeth Warren: "Bernie thinks that we should raise taxes on middle class families to pay for healthcare and I've shown that we don't actually have to do that." pic.twitter.com/CZ9fuYQDwc

Warren was eventually going to have to answer this question about cost. The tired and stale debate talking point that "the rich's tax burden will go up while everyone else's wouldn't" wasn't going to cut it anymore, especially after it became a debate topic multiple times, with Sen. Amy Klobuchar (D-MN), another former 2020 candidate, running over Warren's points with a tank. And then, came one thing that should be looked into as to whether this caused Warren's campaign to start hemorrhaging. After Thanksgiving is when this started to happen, but why? Could it be Warren's backtracking on health care, a more phased-in approach to her health care agenda? That is not revolutionary, an aspect that the far-left thirsts for—and Warren making this more moderate play was, as some noted, a sign that maybe she can't be trusted to enact a total overhaul of American health care. The Wall Street Journal's Kimberley Strassel noticed this back in November:

Sen. Elizabeth Warren admitted … that she had made a colossal, potentially fatal, campaign error—and immediately proceeded to make it worse. If the Warren presidential bid flops, this will be the moment to mark.

That admission didn’t come in so many words. It came instead in the form of a major update to Ms. Warren’s Medicare for All plan. The Massachusetts senator now proposes a two-year “transition” period, in which Americans would be able to opt into Medicare. Put another way, Ms. Warren now calls for the same sort of public option as her “moderate” competitors. She says that she will wait until the third year of her presidency to abolish private insurance.

The precise origin of this debacle was the moment in the first June Democratic debate when Ms. Warren announced she was “with Bernie”—Sen. Sanders of Vermont—on Medicare for All. Up to that point, she had afforded herself wiggle room, saying that she believed in a government-run system but stressing that there were many different “paths” for getting there. Her desire in that debate to keep pace with Mr. Sanders opened her up to relentless demands that she explain how her own plan would work.

...the left is unhappy by what they see as a cop-out. Progressives rightly fear that when Ms. Warren says she’ll enact Medicare for All later, she won’t do it at all.

And by January, she was bleeding liberal voters, the very folks who should be receptive to her radical health care agenda. Maybe a combination of the backtracking and her inability to sell a cost analysis that didn't sound utterly insane impacted the electability aspect with Democratic voters. Oh, and there are a whole host of other issues that hit her authenticity and honesty. She was quite the flip-flopper, one that would give 2004 John Kerry a run for his money in this sad, sad contest (via Inside Sources):

“She got an authenticity problem,” one DC political operative told InsideSources. “It’s the one thing about her that’s real.”

The authenticity issue appeared again this week when Warren amended her views on the U.S. military strike that killed Iranian Quds Force leader Qasem Soleimani, after blowback from progressives. Her first reaction was to declare Soleimani a “murderer responsible for the deaths of thousands, including hundreds of Americans.”

Within 24 hours she was calling him a “senior government official,” who had been “assassinated,” and she repeatedly refused to concede that Soleimani is a terrorist. (He was declared the leader of a terrorist organization by both the Bush and Obama administrations.) Rather than celebrating his demise, Warren was suggesting that Soleimani only died because Trump is facing impeachment.

Why the shift? Because progressives like Sanders were denouncing the Trump administration’s action as illegitimate, and were uncomfortable with criticism of Soleimani that might support Trump’s case.

The Soleimani story is small potatoes. But it’s part of a growing list — her claims of Native American heritage, her debunked story about being fired over a pregnancy, her misleading statements about her children attending public school and her backtracking on Medicare For All — that suggests Warren is willing to say whatever it takes to get elected.

She's a liar. She's a cheat. And she peddled a bold health care policy, the holy grail issue for leftists, only to end up constructing what some would rightfully classify as a political escape hatch. If I could choose a lie that would have the greatest lethality toward Warren, it's her fumbling on health care. The other issues were most likely brushed off since they were lobbed by conservatives regarding her race grifting, the firing over being pregnant that never happened, etc., but promising something huge on health care, only for it to be perceived as a fake-out by the progressive Left is something that could kill you quickly in a Democratic primary. You know who didn't compromise on this issue: Bernie Sanders. And he's still in the race for now. Warren can be a good debater. She can deliver brutal lines—just look at what she did to Mike Bloomberg. We already knew he was a grade-A a-hole, but she polished that aspect about him for the world to see on that debate stage. Bloomberg didn't take it well. His support in the polls stalled—and now he's done after dumping over $500 million in cash for this effort.

Sadly, a big backtrack on a huge issue among Democrats, plus all the other little lies and facing another left-wing titan, Bernie Sanders, who already has a national constituency, cost her. Two identical political candidates cannot occupy the same space, and in this case, the old white guy won out. How sexist is that?

Meanwhile, Bernie got slapped by southern black voters and suburbanites, showing that maybe there is a large swath of the Democratic Party that is not down for a Sanderista revolution.