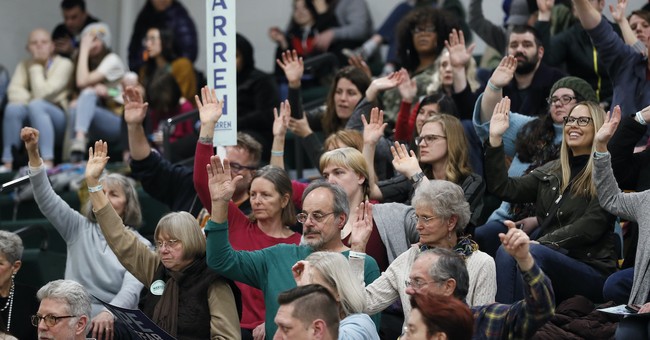 Yeah, this wasn’t timed to drop during President Trump’s victory presser post-impeachment. Democratic National Committee chair Tom Perez is calling for the entire contest to be recanvassed. Monday night’s caucuses were a total and complete disaster. We had no data. For hours we had no data due to a coding issue with the app Democrats were using to tally the votes. This led to a “quality control” review of the results. The dumpster fire was now going strong.

On Tuesday, 62 percent of the results were released after apologies from the state party over the chaos that ensued. With 97 percent of the vote counted, it looks like former South Bend Mayor Pete Buttigieg will walk away with the most delegates, though Sen. Bernie Sanders won the popular vote. Yet, there seem to be discrepancies in some of the precincts. It’s still a debacle and now Perez said he has had enough (via Politico):

Enough is enough. In light of the problems that have emerged in the implementation of the delegate selection plan and in order to assure public confidence in the results, I am calling on the Iowa Democratic Party to immediately begin a recanvass.

Why haven't you resigned and gone into hiding? https://t.co/jjt4A4VIIP

The leader of the Democratic National Committee called for an immediate recanvass of the Iowa caucuses Thursday, dealing another blow to Iowa’s reputation and further extending an already delayed process to tally votes from Monday night.

“Enough is enough,” DNC Chairman Tom Perez tweeted Thursday afternoon. “In light of the problems that have emerged in the implementation of the delegate selection plan and in order to assure public confidence in the results, I am calling on the Iowa Democratic Party to immediately begin a recanvass.”

Before Perez’s announcement, Pete Buttigieg and Bernie Sanders were virtually tied at 26 percent with 97 percent of precincts reporting. Buttigieg led in percentage of state delegate equivalents by just one-tenth of a percentage point, but Sanders led in the popular vote by more than 2,500 votes.

The Associated Press said the race was too close to call.

And now Sanders has gone on to declare victory:

Bernie Sanders is claiming victory in the Iowa caucuses, though the race officially remains too close to call and the Democratic National Committee chairman has called for a recanvass. Incomplete state party results show Pete Buttigieg with a slight lead in the state delegate count.

"Even though the vote tabulations have been extremely slow, we are now at a point with some 97 percent of the precincts reporting where our campaign is winning the popular initial vote by some 6,000 votes," Sanders told reporters at his New Hampshire headquarters Thursday. "And when 6,000 more people come out for you in an election than your nearest opponent, we here in northern New England call that a victory."

Why wouldn’t he? There is no reason for anyone to trust the results after this disaster. The New York Times' Nate Cohn said a recanvass isn't going to do much. If anything, it might make things worse:

Many of the irregularities may result from improper implementation of the caucus procedures, which would be reflected in the preference cards

Unlike a typical recount, there's not necessarily a reason to assume the preference cards are more accurate than the vote tallies, since we don't really know that all properly tallied voters have their preference cards properly reported, etc.

And it is even conceivable that it works the other way. We have three poorly tallied results that don't make sense. There's a real chance we just tally two more.

This is not a recanvass in any traditional sense of the word, but this does make sense in so far as an actual recanvass might have only made things worse https://t.co/SfVFgZ3x5W