What If I Told You There Was an Event in Las Vegas that Had 12.5 Miles Worth of Guns and Ammo? 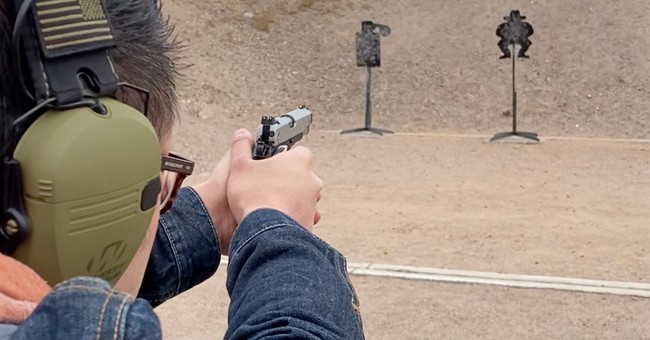 So, what is Shot Show? Well, it’s only a gun-lovers paradise. Actually, no—that’s not quite fair. It’s for gun owners, Second Amendment supporters, hunters, and those who love the outdoors—and for all the companies that provide for this large customer base. This event hosted annually by the National Shooting Sports Foundation is the pulse for the Second Amendment and the industry it serves. Yet, it’s evolved. the show is just massive. It’s 12.5 miles of guns and ammunition companies. Ruger, Sig Sauer, Remington, Federal Ammunition, PMC ammunition, Smith & Wesson, Kimber, Mossberg—any company that is involved in the sale of firearms, ammunition, holsters, or other accessories will be here. Any company that caters to camping and the outdoors will be here, including knives, a variety of sunglass wear, and even drones. Hunting decoys, jackets, fatigues, scopes, red dot sights, Kevlar, and tactical gloves will be here. There is also an entire section devoted to law enforcement tactical gear. Major gun manufacturers might unveil some of their new toys that will be available to the military at this show, as Sig Sauer did.

Hordes of people attend this event which is really industry-based. You need to be invited or know someone. And for media, well, the process for credentialing is rather extensive. The key here is if you write about outdoor life, consider becoming a member of the Professional Outdoor Media Association (POMA) and make inroads with the NSSF communications staff. I say POMA or any other outdoor media association because NSSF does not accept Capitol Hill credentials. If your outlet isn’t entirely devoted to outdoor life, then please ask your editor for a letter of assignment. Other than a slightly more complicated hurdle when it comes to credentialing, the rest of the process is a cakewalk.

Held at The Venetian on the Las Vegas Strip, the experience is overwhelming. You will need a game plan. Shot Show is like the Conservative Political Action Committee conference held by the American Conservative Union concerning that you will not get to everything. But take that aspect and magnify that by 1000. We’re talking 12.5 miles of exhibits here folks. That’s 2,600 companies. The stats are everywhere reminding attendees of the breadth of this event. If you could visit every exhibit, you would only have 22 seconds to spare. Twenty-two seconds to see everything that could fit into an area that’s the equivalent of nearly 11 football fields.

That alone shows you the gravity of our love for firearms, hunting, and the outdoors. There’s a $6.2 billion business devoted to people who engage in these activities. Over 300,000 people’s livelihoods are dependent on the health of our Second Amendment, hunting culture, and conservation efforts. It’s not alt-right. It’s not a white supremacist boogaloo. It’s ordinary Americans who love to shoot and be outside. If that’s the latest criterion for being a neo-Nazi, then the word has lost all meaning. For the politically savvy, this is a legion of people who must be engaged and must vote regularly. President Trump knows the value of these people’s votes. And civic engagement was a key priority for the NSSF’s leadership board for this year. The state of the industry is not strong. It’s challenged, as NSSF President and CEO Joe Bartozzi said during the conference.

We see this with the recent gun control pushes in Virginia, Vermont, and Florida. The anti-gun Left is pushing through new measures to either restrict access of ammunition sales of law-abiding gun owners, access to firearms themselves or pushing through regulations and ordinances that target those solely because they are exercising their constitutional second amendment rights. Whether it be red flag laws, which will be abused by anti-gun liberals or expanding background checks, which serves as the basis for a national registry with the intent on confiscating Americans’ property, the Moms Demand crowd is no joke anymore. They’re learned. They’re adapted. And they’re clinching wins.

To combat the anti-gun Left in this war, Bartozzi unveiled GunOwnersCare.org and GunVote.org. The latter provides those with information about 2020 candidates, polling locations, and how to obtain absentee ballots. Bartozzi cannot endorse candidates, he of course, heavily encouraged all to get to the polls this November or during any election since the health and safety of the industry depends on it. Gun Owners Care is simply a nexus point where gun owners and Second Amendment supports can redirect the smears back at the liberal media, as it showcases the various gun safety prevention initiatives the NSSF quarterbacks on a daily basis—programs that are not covered by the liberal media since they actually try and offer solutions to a problem that doesn’t require shredding the Constitution. It also provides an outlet for gun owners to tell their stories and reverse the media’s perverted narrative on gun culture.

If the liberal media would actually look into what NSSF does on this front, they would find Project ChildSafe, FixNICS, Don’t Lie For the Other Guy (which combats illegal straw purchases), and Operation Secure Store as some of the prime examples where this organization seeks to disseminate information that leads to responsible gun ownership and seeks to eliminate the many horror stories about household accidental discharges that at times, have led to tragic results. They also have developed a suicide prevention tool kit to help industry members reduce this equally tragic occurrence in our society.

.@NSSF is working closely with @ATF through #OperationSecureStore to deter these criminals, and offering rewards for their conviction. This is how the firearms industry is providing #RealSoutions. https://t.co/szM2Z4Kp2K

This year, the NSSF @ProjChildSafe program recognizes 20 years of genuine #firearmsafety. Take a look at our journey to date and share with your friends and family to help spread a culture of safe firearms storage. #gunsafety pic.twitter.com/8ocJTJYj5U

It’s time for gun owners to tell their stories about how they’re contributing positively to America’s culture. @NSSF’s Gun Owners Care campaign will unite gun owners and the firearms industry in this common cause. #GunOwnersCare https://t.co/z4MU9mqePt

On a positive note, as reported in the past, Bartozzi noted that there has been a steady increase in family and female participation in shooting sports. The NSSF encourages its members and supporters to take someone who has never been to a gun range or outdoors and help them experience activities that are enjoyed by millions. The Plus-One initiative, where shooters are encouraged to introduce first-timers to the range, was alive and well, even at Shot Show:

One thing I did notice is that this event has become an international affair. There are attendees from 113 different countries. So, is Shot Show also an international arms conference? There were multiple European ammunition and firearms manufacturers. Some of which I already named at the top. You can Instagram and take photos of the huge collection of rifles, handguns, shotguns, and various gear that comes with it, just be courteous and ask the exhibitors if it’s okay first. They’re happy to oblige. Be careful, though. The exhibit hall has a tendency to easily engulf you. You can easily get lost but in a good way. You’re bound to walk into some company you’ve wanted to see unintentionally and so begins the whirlpool that could land you in the area for the next several hours. As I said, have a game plan. I will say the Remington, Sig Sauer, Mossberg, and Kimber exhibits were outrageous. Smith & Wesson was excellent too, showcasing their M&P Shield series which is a top-selling concealed carry gun un the country. Sig also had their flagship P226, 229, and 220 models on display. Heckler and Koch was there as well and for movie references, they manufacture the submachine gun Bruce Willis uses against Hans Gruber and his goons in Die Hard, the greatest Christmas film ever made.

Also, don’t forget that multiple organizations, POMA, DC Project, and other industry-related companies, have press conferences throughout the day, so it’s an information overload. It’s very overwhelming. No doubt about it. But it’s something that every Second Amendment supporter or hunter should try and get into to see the latest gear and to get a pulse on the industry.

Next year, Shot Show expands to the nearby Caesar’s Forum, where there are over 1,000 companies already on a waiting list to see if they will be lucky enough to showcase their product line for the 60,000 attendees who flock to Vegas every year for this event.