Despicable: Guess Who Slithered into the VA State Senate After a Teen Sex Scandal? 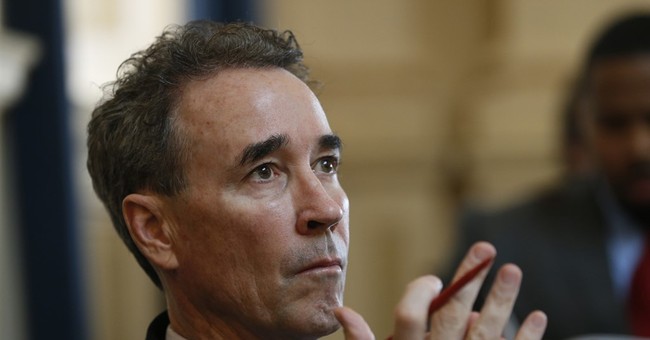 Well, Virginia is now a blue state. We’re no better than Maryland trash and the rest of the northeast and a parade of horribles is set to befall the state. It’s really a sad joke. Any Republican would’ve been forced from office concerning the scandals that have rocked Richmond. The lieutenant governor was slapped with multiple allegations of rape and the attorney general and governor—all Democrats—engaged in blackface during their youth. Blackface, folks. And yet, the Democrats were rewarded last night. For the first time in two decades, the Democrats will control all aspects of political power in the Old Dominion. And while we can focus on the blackface and (alleged) rape escapades that engulfed Richmond for a hot second, let’s not forget that a politician who was jailed for a teen sex scandal is now back, garnering 60 percent of the vote. Yes, it’s Joe Morrissey, who had a sexual relationship with his then-17-year-old secretary when he served as a House delegate (via WJLA):

Not only is the Democrat Governor of Virginia a racist, and the Democrat Lt. Governor a rapist, another Virginia Democrat who just won election was jailed for sleeping with minor.

But YAY!!! Virginia is blue!!! https://t.co/CxptYlATyy

A former Virginia lawmaker who made headlines after being accused of having sex with his teenage secretary has won a Senate seat.

He faced off against Independent Waylin Ross and got more than 60 percent of the votes.

Morrissey was jailed four years ago after the sex scandal involving his secretary, who Morrissey later married. The couple now has three children.

Then again, it’s not like Morrissey wasn’t able to mount a comeback. He won the special election for his own former delegate seat and then went on to serve a six-month jail sentence (via Richmond Times-Dispatch):

Morrissey’s reputation also includes a misdemeanor conviction of contributing to the delinquency of a minor involving relations with his then-17-year-old law firm employee, whom he later married. His wife became a prominent figure in his campaign and introduced him at the campaign kickoff in early April at the Satellite Restaurant in South Richmond.

After the conviction, Morrissey resigned his 74th House District seat, reclaimed it in a special election, and then served a six-month jail term while serving as delegate during the day during the General Assembly session in 2015.

The Virginia State Bar disbarred him — for the second time in his legal career — a decision he has appealed.

Racism, teen sex scandals, blackface-wearing antics—this is the Virginia Democratic Party in the age of Trump. Oh, and you know what they’re going to push is going to make New Jersey seem like a moderate, purple state. Then again, some of the blame must be directed at the Virginia Republican Party. You let things atrophy, as evidenced by the fact that 25 percent of the state senate races had no GOP opponent.