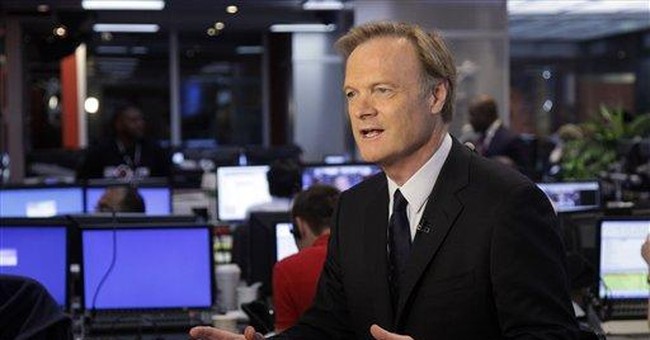 The Democrats and the liberal media just cannot let Russia go. It also shows that President Donald Trump lives rent-free in their heads and that it drives them totally insane. Another thing that’s also quite clear, and it’s been this way for quite some time, is that MSNBC is just there to give progressives their daily fix. They’re meant to keep liberals from jumping off cliffs. That’s it. it’s the only way to explain host Lawrence O’Donnell’s atrocious judgment in going to air with a story that only had one source and so shoddy that he was forced to apologize (sort of) for it. Even The Washington Post couldn’t defend it, with media writer Eric Wemple taking the liberal pundit to the woodshed, asking whether O’Donnell was fit to host a program on the network:

There’s a two-word phrase that will stick with MSNBC host Lawrence O’Donnell for some time, if not his entire career. He invoked it over and over on his Tuesday night program in reference to Donald Trump’s dealings with Deutsche Bank. “I may have some information in this next hour which would add a great deal to their understanding of that, if true, and I’ll be discussing it here in the beginning of the show,” said O’Donnell at the outset of his opinion program, during the handoff from colleague Rachel Maddow.

He went to the wishing well again: “I want to get your reaction to what it could mean, if true, and I stress if true because this is a single source.”

Actually, no: The key words of the opening discussion were the uncorroborated, wish-fulfillment garbage that O’Donnell presented to his viewers: Namely, that according to his “single source,” loan documents from Deutsche Bank involving Trump “show that he has co-signers. That`s how he was able to obtain those loans. And that the co-signers are Russian oligarchs.”

John Heilemann, an MSNBC national affairs analyst, regurgitated the cautionary phrase of the moment and then proclaimed how big a story this could be: “Got to stress if true, but if true, the reporting that you have … it’s the skeleton key, right, that opens — picks the lock on so many fundamental mysteries of the Trump era.”

Capacious and loving First Amendment protections, though, do nothing to mitigate the failings of O’Donnell. With his repeated “if true” caveats, O’Donnell was mocking the core idea of journalism — which is to say, the verification of stray tips and rumors. Reporters and TV hosts mess up all the time, broadcasting scoops that turn out to be flimsy or just plain untrue. The mistakes stem from poor execution, misunderstandings, uncooperative subjects, stupidity, groupthink — and any number of other considerations that fall short of warranting disciplinary action. Here, the catastrophe appears to flow from one man’s conclusion that having Russian oligarchs on Trump loan documents is a story that’s too good to check. When we asked an MSNBC spokesperson whether O’Donnell did indeed check with someone in the Trump orbit before his report, we received another decline-to-comment response.

Is such a fellow fit to host an MSNBC program?

Last night I made an error in judgment by reporting an item about the president’s finances that didn’t go through our rigorous verification and standards process. I shouldn’t have reported it and I was wrong to discuss it on the air. I will address the issue on my show tonight.

If we’re going by the times when the media actually held their own people accountable, the answer is no. In December of 2017, ABC News’ Brian Ross took to air a shoddy Trump-Russia story, reporting that Michael Flynn, who would later be appointed Trump’s first national security adviser, was ordered by then-candidate to make contact with the Russians. That was not true. This was done after Trump had won the election, part of your routine diplomatic groundwork building that’s done with any incoming administration. Ross’s report tanked the markets. Ross was suspended for four weeks and eventually, Ross parted ways with the network in 2018. Also, in 2017, CNN, another anti-Trump outfit, published a shoddy Scaramucci-Russia story. Heads rolled there; three reporters were forced to resign (via Politico):

Three CNN staffers have resigned following the publication and subsequent retraction of a story linking a Trump transition team member to the Russia-related investigations.

The piece, published late last week, cited an anonymous source saying the Senate Intelligence Committee was looking into the chief executive of a $10-billion Russian investment fund who met with financier Anthony Scaramucci before the inauguration. The report also said that two Democratic senators wanted to know whether Scaramucci had indicated in the meeting whether sanctions against Russia would be lifted, a decision that could impact the investment fund.

Out are: The reporter, Pulitzer-Prize nominee Thomas Frank; assistant managing editor Eric Lichtblau (who recently joined from the New York Times and is a Pulitzer winner himself); and Lex Haris, the executive editor in charge of investigations.

"In the aftermath of the retraction of a story published on CNN.com, CNN has accepted the resignations of the employees involved in the story's publication," CNN said in a statement.

Stop the hammering for a second, O’Donnell. You stepped on a rake. This was avoidable.