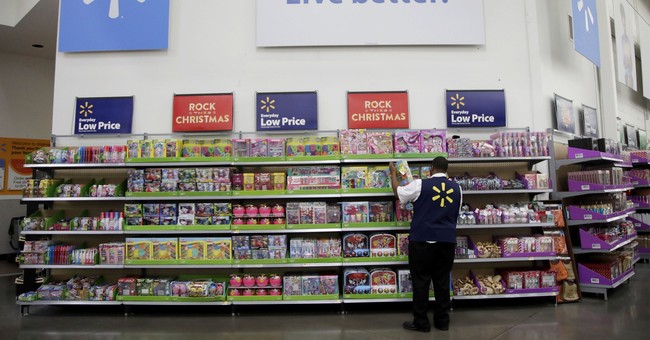 What happened at a Missouri Walmart could have potentially been another horrific mass shooting. Some guy decided to waltz on into the establishment with an AR-15 rifle. An off-duty fireman with a concealed carry permit held the suspect at gunpoint until police arrived. It was a classic good guy with a gun stopping a bad guy with a gun. These stories exist, though they are much more severe than this act of stupidity (via NBC News):

The armed man who walked into a Missouri Walmart store dressed in body armor and fatigues and was detained at gunpoint by an off-duty firefighter is "lucky he's alive still" considering the situation he created, a police official said.

No shots were fired in the incident that happened just after 4 p.m. Thursday in Springfield, Missouri, a city of around 160,000 in the southwestern part of the state, officials said.

The man who is said to be white and in his 20s was detained by the armed firefighter until police arrived at the Walmart Neighborhood Market, police said in a statement. The man in body armor had been seen pushing a shopping cart and recording video of himself on a cellphone, police told NBC affiliate KYTV.

Open carry is legal in Missouri, and this isn’t to bash those who exercise their Second Amendment rights in this way, but there has to be some situational awareness here. There was a terrible mass shooting at a Walmart in El Paso, Texas, where 20-plus people were killed and scores more wounded by some racist nut—and you go into a Walmart like that after this. Yes, you have the right, but don’t get angry when someone calls the cops, especially after last weekend’s string of mass shootings. The suspect, Dmitriy Andreychenko, 20, is now being charged with making a terrorist threat (via NPR):

Police in Springfield, Mo., arrested a 20-year-old man wearing body armor and carrying a loaded rifle — and more than 100 rounds of ammunition — at a Walmart store Thursday. Formal charges of making a terrorist threat in the first degree are now pending against Dmitriy Andreychenko, police say.

Store employees pulled the fire alarm and shouted for people to flee. As they did, Andreychenko followed them outside.

In the parking lot, Andreychenko was detained at the scene by an off-duty firefighter who was armed and held the man at gunpoint until police arrived, according to the Springfield Police Department. He was arrested without incident, and no injuries have been reported.

His arrest was captured on video. Julie Belew filmed him from inside her car. The footage shows the young man walking down a grassy embankment, his hands over his head. Off-camera, the firefighter can be heard reporting the incident to emergency dispatchers.

"Don't touch that rifle," a man commands Andreychenko as he heads down the hill, still holding his cellphone.

Even if this was an incident of someone just exhibiting absolutely horrendous judgment, this was a close call. It could’ve been a different story.