The Freakout Over Chris Pratt's T-Shirt Was Small, It Exposes Larger Rant Against Trump's Tweets Are A Joke 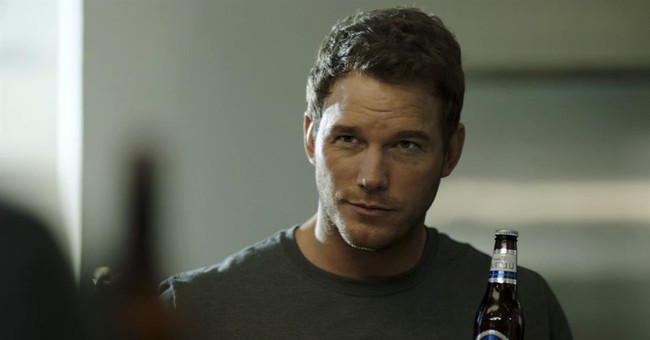 Chris Pratt, the actor of Guardians of the Galaxy and Parks and Recreation fame, is now canceled. He’s really a horrible, horrible man being because…he wore a “Don’t Tread on Me” T-shirt? Is this real? Sadly, yes, the actor wore the shirt with the Gadsden flag and some members from the legions of the politically correct pounced on him. Pratt is now a white supremacist because…that’s the Left default’s position on everything (via Fox News):

Yahoo is facing heavy criticism for an article calling Chris Pratt a "white supremacist" because he wore a T-shirt with the Gadsden flag.

Pratt, best known for his starring roles in "Guardians of the Galaxy" and the "Jurassic World" franchises, was seen wearing a T-shirt featuring the American flag with a coiled rattlesnake in front of it with the text, "Don't tread on me."

The coiled rattlesnake and the "Don't tread on me" motto are from the iconic Gadsden flag, which was created by American general Christopher Gadsden in 1775 during the Revolutionary War. It was meant to symbolize liberty and freedom.

In recent years, the flag has been revived by the Tea Party.

The article also included six posts from Twitter users knocking Pratt's shirt, one of them accusing the actor of wearing a shirt with a "white supremacist dogwhistle."

But many blasted the article on Twitter, with Conservative commentator Ben Shapiro calling it "pure idiocy."

"Not every symbol of the early republic is a white supremacist symbol, unless you are a moron," Shapiro wrote, hinting at the controversy surrounding the Betsy Ross flag earlier this month.

Okay, again, a few unhinged liberals decided to self-detonate their day over this non-troversy. Shapiro is right. Those who hold the view that everything from the days of the early republic is indeed insane. Yet, it doesn’t negate the overall impact of this mini-meltdown. The Left often uses racism as an attack, even towards positions and persons where it doesn’t even apply. When everything is racist, nothing is racist. The Washington Post actually had a decent piece on Pratt-gate, noting that it puts the media in a horrible light, namely that they’re lusting for such trash, despite that the piece wasn’t from a political writer, but one working in the entertainment section of the site. Yet, culture and politics go hand-in-hand. Maybe this wouldn’t be such a hot flash issue if the media didn’t overreact to everything this White House does. And forget the racism angle, the fact that the media cannot accurately report on this White House has also been a cancer to the credibility of this industry. Remember the bust of MLK, Jr. being removed, the feeding of koi fish with the Japanese prime minister, and being the first president to not take questions from the press on his first trip to China? All were fake news.

With Trump’s recent tweets, where he attacked Rep. Alexandria Ocasio-Cortez (D-NY) and her crew, saying they should go back to the crime-ridden places from whence they came, fix it, and come back. He also said if they’re not happy, they can leave the country. This drew accusations of racism. House Democrats condemned him from it. First, I don’t think the tweets were racist. They were inaccurate, as it made it seem like he thought most of this crew weren’t born in the U.S.  And frankly, I’m not going to take lectures on what is and what isn’t bigotry from a party the refuses to condemn the anti-Semitic antics from the very people Trump is criticizing in this thread. Looking at you, Ilhan Omar. If you cannot call out anti-Semitism, then just go home. Go home, Democrats.