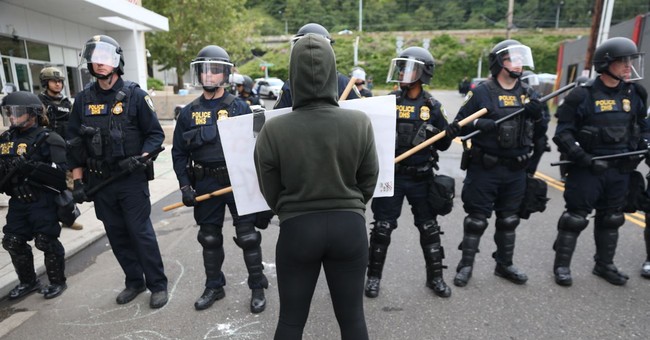 So, when can we call Antifa a full-blown domestic terror organization? Over the weekend, police killed an activist from this progressive mob after he tried to assault an Immigration and Customs Enforcement detention facility in Tacoma, Washington. Willem Van Spronsen, 69, was armed with a rifle and incendiary devices, though law enforcement is saying they haven’t pinned down a motive, which is shocking, to say the least. This man is a left-wing loon, part of a larger mob of progressive thugs who hate this country and any authority figures that seek to uphold law and order. They’re insane. A friend of Spronsen thought this was a suicide, believing this assault was meant to spark a larger conflict (via NYT):

Here is my video which captures Willem van Spronsen, the JBGC antifa militia member who was killed yesterday outside the Tacoma, Washington ICE facility. Police say he arrived with a rifle & began to firebomb the place & attempted to make a tank explode. pic.twitter.com/kPPlyiwVZl

Seattle Antifa Action has posted a eulogy & the ICE firebomber's alleged manifesto on its Facebook page that was sent to friends before the attack. In it, he allegedly wrote: "I am antifa, I stand with comrades around the world..." pic.twitter.com/4rTDYDu0Xb

So Antifa just took its first step toward becoming a domestic insurgency. https://t.co/ua7hiR87jL

The police fatally shot a man who was attacking an immigration detention center in Tacoma, Wash., on Saturday morning, the authorities said.

The man, who was armed with a rifle, was throwing unspecified “incendiary devices” at the Northwest Detention Center, according to a police statement. The man, identified by officials on Saturday afternoon as Willem Van Spronsen, 69, of Vashon Island, Wash., continued throwing lit objects at buildings and cars, the statement said.

“One car was fully engulfed in flames,” said Officer Loretta Cool, a spokeswoman for the Tacoma Police Department.

Mr. Van Spronsen also attempted and failed to ignite a commercial-sized propane tank attached to the center, said Shawn Fallah, the resident agent in charge of the ICE Office of Professional Responsibility.

“This could have resulted in the mass murder of staff and detainees housed at the facility,” he said. “These are the kinds of incidents that keep you up at night.”

Officers arrived around 4 a.m. and called out to Mr. Van Spronsen, who was wearing a satchel and had flares, the statement said. Shots were fired that resulted in his death, though Officer Cool could not say whether he had opened fire.

Mr. Van Spronsen was declared dead at the scene. He died of multiple gunshot wounds, according to the Pierce County medical examiner. No officers were injured.

Police have not established a motive for the attack, but The Seattle Times reported that a longtime friend of Mr. Van Spronsen’s, Deb Bartley, believed he had intended to provoke a fatal conflict.

“He was ready to end it,” she told The Times. “I think this was a suicide.”

Antifa terrorist Willem Van Spronsen carried out this terrorist attack after weeks of Democrats claiming migrant shelters are "concentration camps" and whipping up hatred against ICE and CBP https://t.co/cluqAdgc4x

Andy Ngo, a reporter who was recently assaulted by Antifa, posted video of Spronsen at an Antifa rally. Federal officials have been warning state and local officials about Antifa’s actions and have classified them as acts of domestic terror. Gee-I wonder why after this weekend’s assault. These people are unhinged.