This Minnesota Town Just Scrapped The Pledge Of Allegiance. Want To Guess Who Represents Them In Congress? 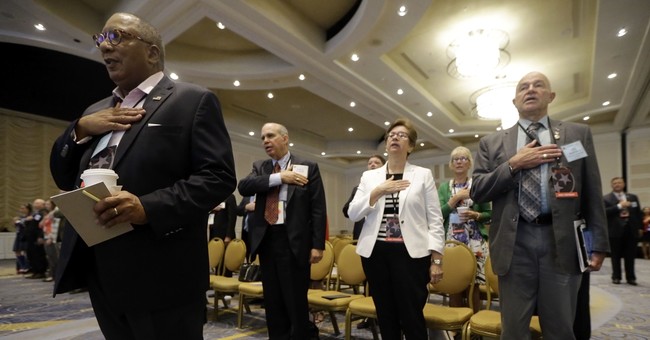 The cancer of political correctness has reared its ugly head once again. This time the plague struck a Minnesota town, where the local council voted unanimously to drop the pledge of allegiance to be more inclusive. St. Louis Park wants to be more welcoming to newcomers and non-citizens and they decided the best way to do that was to trash a hallmark tradition. To be more welcoming to non-citizens, Americans just need to…not act like Americans. It’s this nonsense that gives me hope, along with the booming economy, that Trump will easily clinch a second term. It’s also partially why he won in 2016. This is silly season. Liberal America is perpetually in silly season and just cannot get out of its own way. Who in the hell thought this was a good idea? Everyone on this council deserves to be dealt with the old fashioned way by means of tarring and feathering. Okay—that’s a bit much, but you get my point. Once again it's another event where you see how the Left hates America. This council of five is now the St. Louis Park Director of Idiots (via KIMT3 News):

The city council in St. Louis Park, Minn. voted 5-0 last month to drop the Pledge of Allegiance from their meetings, in an effort to be more inclusive to new residents and non-citizens.

St. Louis Park is about 90 miles from Rochester. However, in the land of the free and home of the brave, it’s a story many people have strong opinions about.

They’re words intended to remind us of who we are and committed to memory for generations.

“It's something that we used to do in school like every morning before first period started,” Larisa Garcia, of Rochester, said, “whether it was elementary, middle school.”

You might take them for granted unless you weren’t permitted to say them anymore.

“I don't know why it would be removed,” Scott Ramey, of Faribault, said. “It'd be like cutting our flag poles down.”

Yes, they should. And reverse this decision as quickly as possible. St. Louis Park is located in Minnesota’s 5thcongressional directs represented by Rep. Ilhan Omar (D-MN), who is one of the most ungrateful refugees this country has ever taken in, spreading anti-Semitic trash on the Hill and pretty much rooting against our troops while discussing the Mogadishu raid famously captured in the book and film Black Hawk Down. She also refused to condemn the terrorist who committed the 9/11 attacks, trivializing the event as one where “some people did something.” Yeah, I’m just shocked liberals peddling trash proposals are running rampant in Omar’s district. The uproar has caused the mayor to suggest reversing Pledge of Allegiance ban, saying it was hastily passed without much consideration. Uh, you think, man (via Fox News):

Council member Anne Mavity, who sponsored the rules change, told KARE 11 that she didn’t feel saying the pledge was necessary, especially for non-citizens.

"Not everyone who does business with the city or has a conversation is a citizen," she said. “They certainly don't need to come into city council chambers and pledge their allegiance to our country in order to tell us what their input is about a sidewalk in front of their home.”

The council's meeting to reconsider the controversial change was held on Monday, as nearly 100 citizens waved American flags and chanted "USA!" in a bid to convince the council to reverse course before the change goes into effect next week.

Mayor Jake Spano reportedly proposed that the decision be reversed, arguing it should have been reviewed more thoroughly before a vote was held, while Mavity proposed further meetings on the subject. No decision was reached at the meeting on reinstating the pledge.