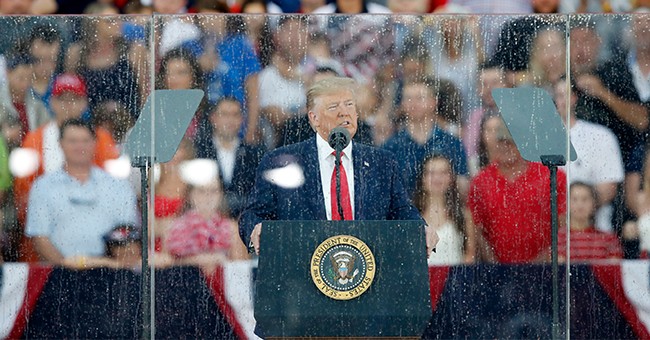 They hated it. They couldn’t stand it. They still cannot stand that this man is president. So, when Trump concluded his Fourth of July address, CNN was there to pounce on it. The notorious anti-Trump network went into overdrive mocking the address because that’s all they can do. Leading up to this event was a freak out over tanks being in the capital. Pure liberal idiocy was on display and that will have to be revisited soon (via Grabien News):

CNN mocks Trump's #4thofJuly speech: "It seems he is reading a Wikipedia page about historical events."

"There was a USA chant. That was symbolic of a rally." pic.twitter.com/gziDmBAa2i

CNN's Philip Mudd on Trump's speech: "I hated it"

"I thought this was about ideals and now we made it about the military" pic.twitter.com/khUo3GgWU5

Trump #4thofJuly remarks: "The future belongs to the brave, the strong, the proud, and the free" pic.twitter.com/2JsWRZAzOR

A panel discussion immediately following Trump’s Independence Day remarks mocked the speech as the product of an “eighth grade history” that was too focused on the U.S. military.

“Sometimes it seems he is reading a Wikipedia page about historical events; on this date this happened,” Lizza complained.

“Let me be subtle here, at a professional level 25 years in national security, I hated it,” Mudd said. “At a personal level, I hated it more.”

“Wen we are in the midst of July 4th after 9/11 at the CIA, I thought we were celebrating the defense of ideals, the right to live free and fair,” Mudd continued. “The right to live according to the documents that our Founding Fathers established, the right to — of every person every citizen in the country to pretend like they can be president, the right to have economic opportunity. I didn’t realize we were fighting the chance to pay for guns, for weapons.”

CNN’s Brianna Keilar said Trump “swerved away” from the purpose of the 4th of July to instead “move into something very popular, which is the military.”

Her colleague, John Kirby, said the 4th of July is “totally the wrong holiday” to celebrate the U.S. military. Kirby said Trump had originally sought to have a military flyover on Veterans Day, but instead “shoe-horned” it into a 4th of July celebration.

Remember these folks are all liberals and a great deal are former Obama officials. Yeah, these things aren’t really pointed out in the chyrons and for good reason. The day is over. Trump supposedly did celebrate the military. These people didn’t like it. So what? We’re still here. No coup occurred. CNN and the rest of these clowns played their part: being against anything Trump does. This commentary is what you’d expect from the D.C. crowd, an insufferable petri dish of condescending progressive plague.