That’s Our Playbook: Why Trump Is Making Some Of Obama’s Former Key 2012 Staffers Very Nervous 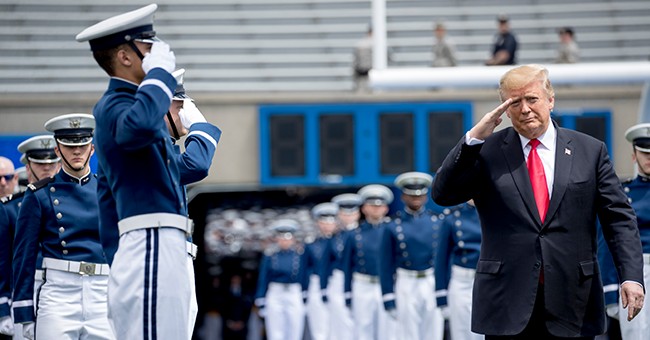 If the election were held today, President Donald J. Trump would be re-elected. The economy is going strong, unemployment is at record levels, dipping below four percent, and paychecks are bigger. Consumer and small business confidence have reached their highest levels in decades. This, plus the power of incumbency and Democrats not really having a solid candidate, means Trump nabs a second term. Even Democratic strategist have to admit this (via The Hill):

A Democratic strategist predicted on Thursday that President Trump would be reelected if the general election were held today.

"I think if the election were held today, that the president would, unfortunately, get reelected," Jennifer Holdsworth, a senior political strategist at MWWPR, told Hill.TV.

We’re going to Keep America Great. We’re going to keep America wealthy and safe. And no one understands this more than Barack Obama former 2012 campaign staff. Some of the key players are seeing something familiar with the Trump 2020 effort. It looks very much like their 2012 playbook.

As the 2020 Democratic clown car gets rolling, this former Obama operative sees the president just dominating the political landscape. The Trump 2020 team is pushing hard on digital and holding rallies in battleground states. He’s already running a general election campaign, whereas the Democrats are scraping by, now being forced to seek out wealthy donors to fill their coffers, and bashing Joe Biden who is getting his flip-flops ready for his policy walk. Ben Labolt is firing off red flares to fellow Democrats, noting Trump’s massive head start in his call to arms piece in The Atlantic:

Presidents who have recently won reelection seeded their victories not in the final sprint before Election Day, but by executing a two-year campaign to exploit a contentious primary on the other side, reconnect with their base of supporters, and define the election as a choice, not a referendum. I served as the national press secretary on President Barack Obama’s 2012 reelection campaign, when we used that strategy to great effect. Now I’m watching President Trump executing the same strategy that powered Obama to reelection, while the Democratic organizations that could answer him have left an open playing field in the battleground states where the election will be decided.

The Trump campaign launched at the start of 2019 and hasn’t paused for a day. It is using the candidate’s schedule, a staffed-up campaign team, and a sophisticated digital-advertising effort to reach its target voters. The campaign has spent more than $5 million on Facebook ads, with a particular focus on older voters and women, firing up the base by attacking “fake news” and promoting its message on immigration. The advertising team has gone beyond social-media campaigns, sponsoring podcasts and creating a significant paid-media presence on YouTube. In fact, Trump is outspending Democrats six to one on video ads, the primary digital-engagement tool for voters today.

Simultaneously, Trump has begun to hold rallies in battleground states across the country, dipping into media markets where he can fire up his base, such as Panama City, Florida, and battleground markets, such as Green Bay, Wisconsin. Many of these visits lead to localized polling bumps that last for weeks.

Look no further than the Trump campaign’s press secretary’s Twitter feed to watch daily footage of the campaign reconnecting with supporters and asking them to engage its networks. Trump’s campaign manager is raising general-election funds and appearing before influential audiences.

Meanwhile, neither the Democratic National Committee nor any of the major Democratic super PACs are live with any notable broadcast or digital-advertising budget in battleground states targeted toward general-election swing voters. The 23 Democratic presidential campaigns are naturally focused on proximate targets, such as winning early states and meeting the DNC’s fundraising thresholds.

While Trump’s soft poll numbers may suggest otherwise, the general-election battle won’t be easy, in large part because he’s getting a head start. The Trump campaign entertained appeals from the Russians and WikiLeaks the last time around; it’s anyone’s guess what measures he and his staff will take to win reelection. The Democratic candidates should be careful not to get caught up in a primary debate that rewards purity (No fundraisers! Attend every forum regardless of audience!) over preparing a precise plan to win the broadest set of voters in order to halt President Trump’s historic assault on Democratic—and democratic—values.

It’s not time for Democrats to despair; it’s time for us to engage. Because primary campaigns have finite resources and shorter-term needs to address before they can get to the main battle, the DNC and allied super PACs need to begin advertising now in battleground states to provide air cover for the future nominee while he or she is tied up in what will likely be a highly competitive and lengthy primary race.

"We need to take nothing for granted. Everything is on the line." https://t.co/duJiAE8DGH pic.twitter.com/ffCtFJmUxu

@benlabot is spot on. Just like we did in '12, Trump is using incumbency to build general election campaign by raising $, investing in digital, connecting w/base & defining terms of race ag. D's. Stakes couldn't be higher to beat him, but in danger of losing unless we invest now. https://t.co/IdBkdsbZZY

And then, there are some Democratic strategists who think Trump would narrowly lose the Electoral College, but concede that because he’s at the top of the ballot, their 2018 enthusiasm advantage has been wiped out. Yet, I don’t expect a change in the 2020 Democratic wind anytime soon. We got a lot of people talking, but no one really stands out. Biden’s numbers are falling and his white voter outreach will be forever crippled if House Democrats continue with this Trump-Russia witch-hunt by moving forward with a formal impeachment inquiry. The rest of the field just doesn’t have what it takes to win. Most are helmed in by geographic rigidity; no one knows whom the hell Sen. Kirsten Gillibrand (D-NY) is. And now you have some historians making the argument that maybe a whacko candidate would be better than the establishment choice. That’s you, Joe Biden (via RCP):

Alan Lichtman, an American University professor who has correctly predicted the outcome of the past nine presidential elections and author of The Case For Impeachment," told HILL.TV this week that based on his predictive system Donald Trump might be on course to win in 2020 unless the economy falters or he is impeached.

He also had some suggestions for Democrats about who to nominate to defeat Trump, saying "the conventional wisdom is all wrong."

"The conventional wisdom you hear from Nancy Pelosi and others is we need to go down the center line and nominate an establishment, experienced, proven candidate, and they’ve done that many times," he said, listing: "Mike Dukakis in 1988, Al Gore in 2000, John Kerry, Hillary Clinton."

"And what do they all have in common? They all lost," he said. "It’s the off-the-wall candidates -- the Carters, the [Bill] Clintons, the Obamas -- who no one expected who have won."

Democrats have a lot to talk about for sure. In the meantime, the GOP has their candidate they’re already running a general election campaign, and if there is one thing we know about the president, he’s going to keep going hard on this front.