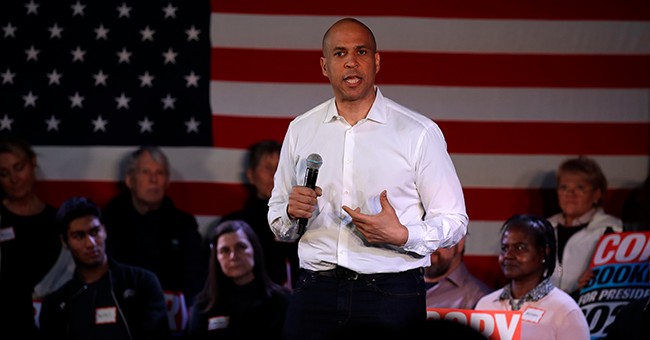 So, is there a single gun control proposal from Democrats that doesn’t trash the Constitution and target law-abiding gun owners? The answer to that would be “no.” Rep. Eric Swalwell (D-CA) who said gun owners should be “nuked,” and that law-abiding gun owners would be jailed under his administration, has company. Sen. Cory Booker (D-NJ) wants to, among other things, like taking the fight to the Left’s favorite boogeyman—the National Rifle Association—force gun owners to register their gun in a federal database. Oh, and he’s mum on whether these people would be jailed too (via NYT):

Senator Cory Booker of New Jersey rolled out a broad plan on Monday that seeks to combat gun violence through measures including a gun licensing program and a ban on assault weapons and high-capacity magazines.

Aspects of Mr. Booker’s 14-part plan are among the most progressive gun-control measures suggested by a candidate seeking the Democratic nomination for president, and are likely to face sharp criticism from gun-rights advocates like the National Rifle Association.

The most notable piece of Mr. Booker’s plan is the proposed gun licensing program, which would enact minimum standards for gun ownership nationwide. Under such a program, a person seeking to buy a gun would need to apply for a license in much the same way one applies for a passport.

Mr. Booker’s campaign said the process would involve submitting fingerprints and sitting for an interview, and would require applicants to complete a certified gun safety course. Each applicant would also undergo a federal background check before being issued a gun license, which would be valid for up to five years.

Other parts of the plan include banning bump stocks, which enable semiautomatic weapons to fire faster; limiting bulk purchases of firearms; and closing the loopholes that allow domestic abusers and people on terrorist watch lists to obtain guns. And the plan calls for the I.R.S. to investigate the N.R.A.’s tax-exempt status, an issue the New York attorney general is also exploring, causing considerable turmoil among the group’s leadership.

…the Protection of Lawful Commerce in Arms Act, is a specific target of Mr. Booker’s plan. In his announcement Monday, Mr. Booker said that if elected president, he would repeal it.

We need an aggressive approach to end the epidemic of gun violence in our country. My new plan would:

?Keep guns out of the wrong hands
?Hold gun manufacturers accountable
?Bring the fight to the NRAhttps://t.co/6dTQ3SGJcM

This is basically just a collection of every gun control measure that deep blue states have enacted over the last decade. It even includes microstamping requirements which are based on an entirely theoretical technology that's not available anywhere.

Cory Booker announces new gun plan that would require every firearm owner to be licensed by the federal government. pic.twitter.com/FFC4avv9Sp

Booker uses the term “weapons of war.” Semi-auto pistols are carried by members of the military. Booker is proposing an all-out ban of *all* guns, not just semi-auto rifles. He wants to increase the prison population by millions. https://t.co/qQSEzqK5CK

.@CoryBooker on his gun registration idea: The only people who should fear it are "gun runners and criminals" pic.twitter.com/eO6Nc5TI4a

Well, for starters that latter policy is a backdoor gun ban, permitting legions of social justice warriors to sue gun manufacturers out of existence. Simply put, the PLCAA states you cannot sue a gun maker whose product was unknowingly used in a criminal act. It’s a major piece of pro-Second Amendment legislation passed under the Bush administration in 2005. Yet, there are other aspects that lead to a massive infringement on gun rights. Stephen Gutowski, a firearms reporter for the Washington Free Beacon, noted how the microstamping provision would essentially lead to a handgun ban, which is what happened in California. In total, the proposal is a blue state nightmare that Democrats want to unleash on the rest of us. And of course, Booker says the only people who should fear his agenda are criminals. Sorry, senator—this whole agenda is straight trash and one that will turn millions of law-abiding citizens into criminals…in accordance with the text of these proposals. It goes without saying…never trust Democrats on anything.