Everyone Freaked Out That Trump Signed Bibles. Reagan, Bush, Obama, And FDR Did The Same 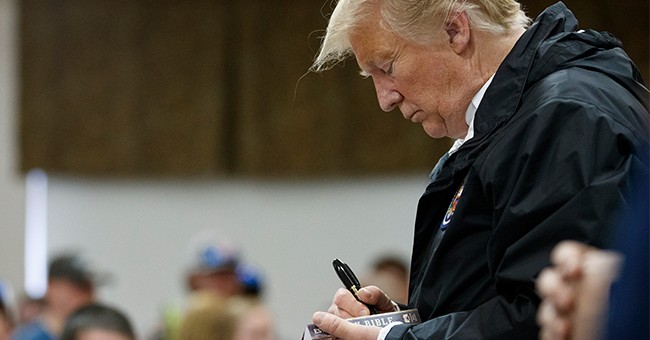 Earlier last week, Lee County, Alabama was devastated by series of tornados that left 23 people dead. President Donald Trump visited the devastated communities in the state, where he was mocked over his border security agenda. Rep. Ted Lieu (D-CA) posted and then deleted an idiotic tweet last Friday, where he said, “WE ARE IN THE THIRD WEEK OF THE NATIONAL EMERGENCY! Can you feel the emergency? Is this why @realDonaldTrump is going to Alabama because we need to build a wall along Alabama’s southern border? Oh wait, I just looked at the map… #FridayMorning Thoughts."

People are dead, man, but this is what you get when your brain is fried from Trump derangement syndrome. Also, California liberals so happen to be the worst and lowest form of being. But then something else happened that drove the media establishment (and some folks on the Right) insane. He signed bibles for the survivors (via Newsweek):

The president and first lady Melania Trump made the trip to Lee County, which was hardest hit by the storm five days ago. He toured the area with Alabama Gov. Kay Ivey, according to this USA Today report. The motorcade stopped at Providence Baptist Church, where crosses had been placed. The president and first lady paused to read the names of the 23 victims, and then they entered the church that has served as a shelter for those who lost pretty much everything from the powerful twisters.

“I saw this and it’s hard to believe,” Trump said. “You saw things that you wouldn’t believe.”

Once inside the church to visit families seeking shelter, and the families of victims killed, the president began signing Bibles and hats for them. When he signed a Bible for one 12-year-old boy, the people in attendance gave them an applause, according to local volunteer Ada Ingram.

“I enjoyed him coming,” Ingram said in TheHill.com. “I think it’s a godsend. I’m sorry. The situation is bad. And there are going to be people who will say 'why did he come to my town?' I don’t know why. I don’t why the hurricane happened [either]. But there is a reason."

And yes, federal aid has also been allocated to these devastated areas. But the media reaction couldn’t have been more predictable (via Daily Beast):

The HBO host threw to a clip of the president surveying the tornado damage in Alabama, before seguing to his bizarre ritual of autographing Bibles for locals in a Baptist church.

“Of course he did,” said Oliver. “I am not remotely surprised that Trump did that, I’m just slightly confused as to why anyone would want him to, because seeing Trump’s autograph on a Bible should be like seeing a picture of your own Mom on the cover of a Penthouse magazine: it should render the whole thing useless, and if you keep reading after discovering it, you’re going directly to hell.”

And look, some people there clearly wanted his autograph and presidents have signed Bibles before, but Trump didn’t just sign the book—he signed the cover!” he continued. “And it is weird to sign the cover of any book, and weirder still to sign the cover of the Bible with this signature”—he said, before pointing to the president’s EKG-like signature. “Because I don’t care what your name is, that is not how you sign something. That’s how you test if your Sharpie still has ink left before you sign something.”

Yes, Oliver is a comedian, but this is just part of an ongoing trend of deep-blue America mocking the death and destruction of rural Americans. Why? Well, they’re not like them. But what was that part about past presidents doing the same thing?

“He signed Bibles with the same hand he used -- as president -- to sign hush money checks to an adult filmstar,” Klain said.

“Presidents seem to sign a lot of random things put in front of them,” Peter Manseau, the Smithsonian’s curator of religion, told the Washington Post.

Bill Leonard, the founding dean and professor of divinity emeritus at the Wake Forest University School of Divinity in Winston-Salem, N.C., said it's important to remember that signing Bibles is an old tradition, particularly in southern churches.

Okay, so once again, the Left doesn’t like this because…it’s Trump. But when Obama did it, it was an act of compassion. Check. We get it. Trump derangement syndrome is becoming a horrifying illness that turns even the smartest into the intellectually disabled. Shut the hell up, liberal media. We don’t care about your outrage. And please prepare yourself for 2020…because he’s going to win re-election.