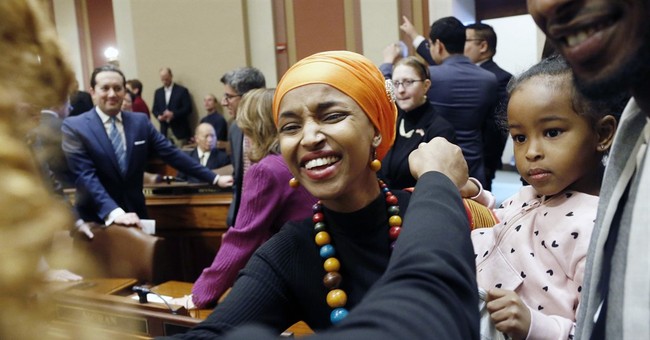 For a brief moment, the liberal media seems to be pressing hard on Rep. Ilhan Omar (D-MN) over her alleged anti-Semitism. The freshman congresswoman went on a Twitter screed that was so vile and nasty that even Chelsea Clinton had to call her out. It wasn’t anything new. It was your typical ‘Jews control the government with their money’ nonsense that’s been peddled by the usual suspects. Omar issued a non-apology apology and then went onto attack the president yesterday morning. She was responding to Trump’s call for her to resign over her antics, which would also have been lobbed at a Republican if he or she made such claims and rightfully so. Omar decided to hit back at the president tweeting, “You have trafficked in hate your whole life—against Jews, Muslims, Indigenous, immigrants, black people and more. I learned from people impacted by my words. When will you?”

For starters let’s get this out of the way, Omar sucks. She’s a disgrace. And this isn’t the first time she’s had to deal with her alleged problem with anti-Semitism. We’ll have something on that later today. CNN’s Manu Raju found himself at the end of her frustration, refusing to comment on her no good, very bad week thus far:

Rep. Ilhan Omar in no mood to talk about her controversies this week. First, she said: “No thank you” when asked to comment on Trump saying she should resign. Second time I saw her, she yelled: “Are you serious?” when I tried to question her.

Asked about her tweet this AM attacking Trump for trafficking in hate, she angrily said: “Yes I tweeted, and there’s a response. You can run that. Have a nice day.” And she walked into a meeting

Rep. Ilhan Omar: "Are you serious? What is wrong with you?"

CNN reporter Manu Raju: "I'm asking a question about your tweet -- you had a tweet saying the president trafficked in hate."

And yes, Omar’s goons came to her defense:

Love your reporting, Manu, but in this case, I concur with her “Are you serious?” remark.

Just stop.
You are becoming a tool of the republican machine.
How about doing some news instead of harassing her.

Come on Dude. Can you ask Republicans the same crap. She apologized.. what more do you need. You’re falling into the GOP b.s. expect better from you.

Twitchy was following the whole affair, though even liberals are starting to say she should be held accountable. Raju’s colleagues also came to his defense, noting that Omar just can’t spew this trash and expect not to be questioned about it. She’ll learn that. Until then, chalk this up as another time she ran away from CNN.

I'm as liberal as the next voter. But she works for the people now, and being questioned is part of her job. She can't expect the journalists to back off.

Omar is no better than any other Representative. She must be held accountable for her words. We can’t be hypocrites. She’d do well to blend into the woodwork for a while.

If you are an elected United States representative who says something condemned by both parties as anti-Semitic, you should expect the press to ask questions on behalf of those you represent. This is simply how our democratic republic works. https://t.co/hIlR6iJikA

Rep. Omar continues to cover herself in gloryhttps://t.co/TiMEB16dbJ