So, Was It Just Pure...Evil? FBI Has Concluded Its Las Vegas Shooting Investigation 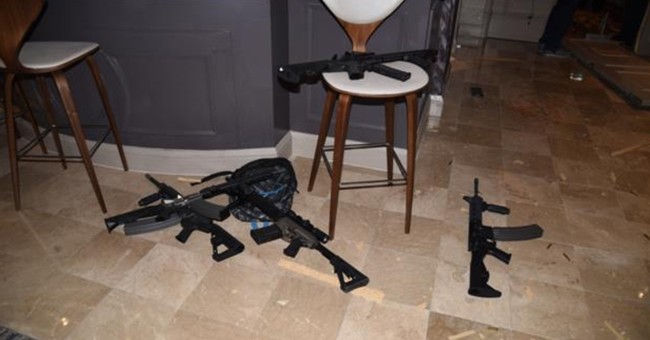 On October 1, 2017, Stephen Paddock decided to load his suite at the Mandalay Bay resort in Las Vegas with guns and ammo. He would then open fire on the attendees of the Route 91 Country Music Festival across the way, laying down a blanket of fire that killed 58 people and wounded over 400 more. It’s the deadliest mass shooting in modern American history. What went through his head over the course of the week leading to the shooting, which showed him exiting and leaving the hotel, is a mystery. What we do know was that every time he came back, he had more bags filled with guns and ammo. Paddock was independently wealthy and liked to gamble a lot. Other than that, why he decided to commit this heinous act of mass murder is unknown. He killed himself before police could apprehend him.

The Las Vegas Police said his motive was unknown. Now, the FBI has concluded their investigation, and their conclusions were the same. Whatever motivation Paddock had for killing these people is left with him (via Associated Press):

A high-stakes gambler who rained a hail of gunfire down on a crowd of country music fans, killing 58, took any specific motive for the 2017 attack to his grave, the FBI said Tuesday as it concluded the investigation into the deadliest mass shooting in modern U.S. history.

The agency found no “single or clear motivating factor” to explain why Stephen Paddock carried out the attack from his suite in a high-rise casino hotel. The 64-year-old fatally shot himself as police closed in.

“It wasn’t about MGM, Mandalay Bay or a specific casino or venue,” Aaron Rouse, the agent in charge of the FBI’s Las Vegas office, told The Associated Press. “It was all about doing the maximum amount of damage and him obtaining some form of infamy.”

The finding was contained in a long-awaited report compiled by the FBI’s Behavior Analysis Unit, a group of experts who spent months examining several factors that might have led to the rampage.

“This report comes as close to understanding the why as we’re ever going to get,” Rouse said.

Paddock wanted to die in infamy, inspired in part by his father’s reputation as a bank robber who was once on the FBI most wanted list, the report said. In many ways, he was similar to other active shooters the FBI has studied.

His “decision to murder people while they were being entertained was consistent with his personality,” the report said.

The gunman was not directed or inspired by any group and was not seeking to further any agenda. He did not leave a manifesto or suicide note, and federal agents believe he had planned to fatally shoot himself after the attack, according to the report.

Paddocks’ brother told AP that Stephen was the “king of microaggression” — narcissistic, detail-oriented and maybe bored enough with life to plan an attack that would make him famous.”

Whatever the case, this investigation is closed. It’s now up for debate over what motivated Paddock to kill. Was he bored? Or could it be summed up in one word…evil?