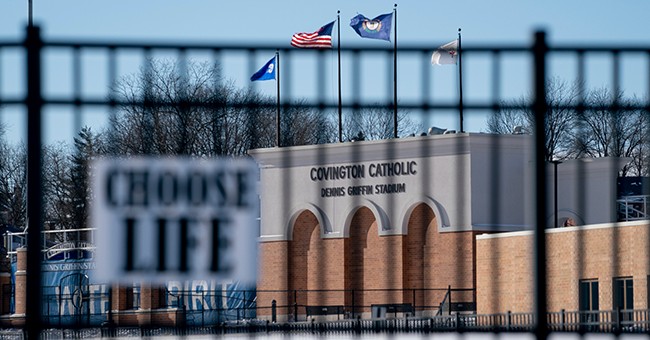 The fallout from the Covington fiasco is over, but the damage is done. The media was left bloodied and bruised, and they set off a vicious campaign of destruction against high school students because they were, white, Catholic, and wore Make America Great Again hats. It was not a racially motivated incident. In short, a bunch of kid from Covington Catholic High School in Kentucky gathered by the Lincoln Memorial during the March for Life. A small group of Black Hebrew Israelites, an alleged racist and black supremacist group, hurled insults at the kids, who responded by doing sports chants. A Native American man, Nathan Phillips, who was part of an Indigenous Peoples March, approached the group of kids. He beat his drum. There was no physical altercation, but the clip of Nick Sandermann, the student in the now viral video, next to Phillips prompted the fake news story that the MAGA-hat wearing students accosted and mocked Phillips, a Vietnam War veteran, which was another false claim.

When the story began to fall apart as soon as more extensive video footage surfaced in the days that followed, the liberal narrative turned from these kids are racist, to they’re Catholic and participated in the bigoted March for Life, because fighting against abortion is just that, said by no one who isn’t infected with brain worms.

Oh, and they were asking for it…because they wore non-controversial hats or something. The rake stepping did not end at NBC News, who published a hit piece that the Covington Diocese barred an LGBT student from delivering a speech at last year’s graduation at Holy Cross High School. You can already see the counterattack: a Catholic school trampled on a gay student’s right to speak at graduation. Yeah, the only problem is that the speech was submitted after the deadline (via NBC News) [emphasis mine]:

In May of last year, the Catholic diocese ruled just hours before Holy Cross High School's graduation that the openly gay valedictorian and the student council president could not give their planned speeches at the Covington school's official graduation ceremony.

Determined to make their voices heard, the valedictorian, Christian Bales, and the student council president decided to give their speeches anyway. After the official ceremony, the pair grabbed a megaphone and spoke to a crowd of students and families on the school’s lawn. Bales' speech, which was posted to social media, quickly went viral.

Bales said at the time that he was unsure whether his sexual orientation played a role in the Diocese of Covington's decision to not permit him to speak at graduation. "I honestly have no idea, because what I've been taught about the Catholic faith is that it's about love and tolerance and acceptance of all people," he said.

“I was not surprised at all,” Bales plainly told NBC News when asked for his reaction to last week's D.C. confrontation. “It was only a matter of time that something this school community did would blow up to this degree, and I think they need to be held accountable.”

Bales claims Covington Catholic is "notorious for being a not-well-disciplined school," and he described the Diocese of Covington as "archaic."

"They have the very last say in everything about students in the diocese," Bales said, adding that the diocese has still not provided him and the student council president with “thorough explanations” of why their speeches were canceled last year.

At the time, a spokesperson for the Diocese of Covington said the students' speeches were not submitted on time and "were political and inconsistent with the teaching of the Catholic Church," assertions Bales denies.

Oh, so the school or the diocese wasn't being discriminatory, which is heavily insinuated here, it was because this band of rebels submitted their speeches late. Talk about a buried lede, but this was a rather obvious attempt to pile on the Catholic diocese and Covington Catholic High. You all see this.

So he was told his speech was “too political” and admits himself he doesn’t know if it had to do with him being gay, and now he dislikes the school for it? Way to spin the title anyway.

He was not 'banned' for speaking because he was gay. He submitted the speech too late and it was too political for the venue. https://t.co/3vNyeNN78n

Its 100% clear from the story he "forgot" to submit his speech, so they didn't let him give it, but how do you even get a story like this without combing the depths? Like, did NBC send an APB out to "everyone who hates Covington high school?"

Instead of apologizing for initially reporting straight trash about the initial incident, the media decided to double down, and ignite a weird anti-Catholic crusade. You were wrong, liberal media. And soon, death threats rolled in and the police had to be placed around campus. The latter remnants of this smear campaign will continue, as we’ve seen from Senate Democrats who think that the Knights Of Columbus are akin to the Ku Klux Klan.