Over MAGA Hats? Alyssa Milano Is Getting Taken To The Woodshed Over Her Trash Tweet About Covington Catholic Students 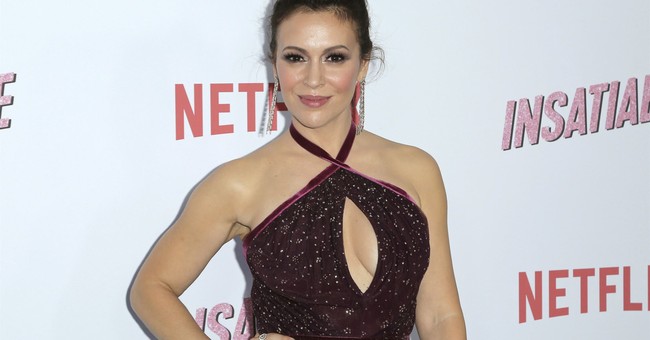 Everyone had the hot takes over the weekend. Students from Covington Catholic High School were subject to the merciless antics of the progressive social justice warrior mob that is out to destroy them. The students attended the March for Life last weekend and were confronted by a kooky group called the Black Hebrew Israelites at the Lincoln Memorial, who hurled obscenities at them. The students did sports chants to drown out the vulgarity. Nathan Phillips, a Native American man, approached the group of kids and beating a drum with the intention of defusing the situation. This turned into ‘a bunch of white kids harassed a Native American,’ which set the Internet on fire. Of course, that was fake news. There was no racism, no harassment, and no chants of “build the wall.” It has been refuted, but the kids were white, Catholic, and wore Make America Great Again hats. They must be marked for termination. They cannot be allowed to live.

Anti-Trump actress Alyssa Milano said that MAGA hats are the new white hoods. Yeah, this was as expected, right. Our friends at Twitchy captured these trash tweets, but also her follow up:

The red MAGA hat is the new white hood.

Without white boys being able to empathize with other people, humanity will continue to destroy itself. #FirstThoughtsWhenIWakeUp

You are literally using, “she was wearing a short skirt in a bar so what did she expect” logic. You know better.

So one side can protest but another side can't? Seems like your "fair" debate is unfair.

Reading things you write gives me a headache.

you are not a good person https://t.co/VEh4jrTupU

Being against the killing of babies is…bigotry? Kids, drugs are bad. Also, it just shows why you should never apologize to the Left. This is what they do. They need to destroy their enemies. Keeping the narrative alive, no matter what, no matter how many times it’s been refuted by hard evidence, must be kept alive. When more videos destroyed the liberal media’s narrative, the goal posts shifted to this laughable position that being pro-life is grounded in bigotry. And yet again, there’s no evidence that there was any bigotry, as you all already know, besides Milano and company saying, ‘I don’t like their views.’ Belief is not evidence. Moreover, was she suggesting that these kids were asking for it? That sounds like a rather problematic view, especially in the wake of the Me Too movement. It’s absurd. And now that Milano has been taken to the woodshed over these trash tweets, she’s going to write an op-ed further elaborating something totally based on fake news. So, brace yourselves; more insanity is coming.

So...I’m going to do what any thoughtful human with a platform would do...write an op-ed.