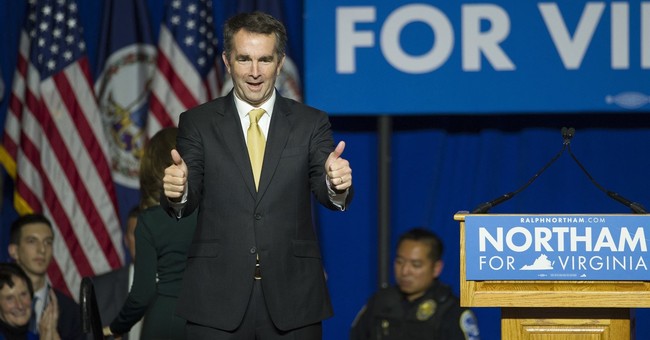 Virginia’s Democratic Gov. Ralph Northam sees an opening, and it’s not an insane push this time. With Republican majorities in the state legislature vastly chipped away, he’s laying the groundwork to import Maryland-style gun control in the Old Dominion. It’s right in the National Rifle Association’s backyard. So, if this is successful, and it very well could be, it’ll be a political and propaganda win for the anti-gun Left. Virginia Democrats want a so-called assault weapons ban, the re-imposition of the one-gun-a-month law, universal background checks, and red flag laws. The latter isn’t all that insane, but there has to be explicit language and due process mechanisms to ensure the government doesn’t abuse this power. The problem is that the anti-gun Left doesn’t want a discussion. So, in principle, red flag, or extreme risk protection orders, aren’t ridiculous, but it takes two to tango. And the Left will most certainly abuse it to take away people’s guns for absurd reasons.

The rest of the package is straight trash, which the NRA and gun rights groups have vowed to fight to the bitter end (via Free Beacon):

Kirk Cox, the Republican speaker of Virginia's House of Delegates, outlined in a Monday tweet his party's approach to the wide-ranging package of gun-control measures the governor plans to pursue.

"The @vahousegop will steadfastly fight to defend the Second Amendment rights of law abiding citizens from far-left gun control proposals this session," he said.

His office told the Washington Free Beacon Republicans would review the details of the individual proposals included in the package when they were made available but pointed to the speaker's tweet as indicative of where the party stands on Northam’s efforts.

The NRA, whose headquarters is based in Virginia, said Northam's proposals were the result of his political ambitions rather than a desire to deal with violent crime.

"Virginians want elected officials to address the root causes of violent crime and find solutions that will save lives instead of pursuing gun-control policies that criminals will not follow and will make it more difficult for law-abiding citizens to defend themselves," Catherine Mortensen, spokesperson for the NRA's Institute of Legislative Action, told the Free Beacon. "This latest gun-control agenda is being pushed by politicians who would rather score political points than tackle the tough issues related to violent crime."

The VCDL is one of the most active and effective pro-Second Amendment groups in the state. The first push will likely fail, but the long game isn’t pretty. With just two-seat majorities in the House of Delegates and the state Senate, it’s likely, given the state’s blue trend, that the GOP will lose control of the legislature. The VA GOP has already caved on Medicaid expansion. Northam could resurrect this when he has total control of Richmond. Even then, let’s say Northam is foiled during his tenure as governor. The next gubernatorial race will most likely be won by a Democrat (again) because the VA GOP’s inability to find quality candidates; 2009 was the last year Republicans won statewide. So, of course, I hope this all goes down in flames. I know the NRA, VCDL, and the VA GOP will show a united front. They probably will win the first quarter. The other three worry me.