Shocker: The Woman Who Tried To Pass Herself Off As Native American Isn't Doing Well With Progressives 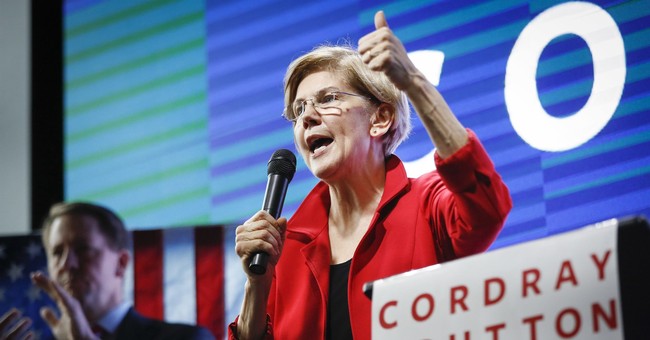 The 2020 Democratic field is going to be an epic clown show. Everyone is jumping in—and it’s going to be a delicious festival of who can out-crazy the other. It’s going to be a contest for who can say is more for open borders, higher taxes, more regulations, and who is the most woke. It’s going to be a cacophony of insanity. And sadly, it seems the usual suspects are not rising to the top. Beto O’Rourke is a work in progress, but no doubt you’ll see his figures rise, unless he just totally drops the ball. Sen. Elizabeth Warren (D-MA) has long been a prod member for the far left wing of the Democratic Party. The problem is that her stock took a hit when she revealed that she was, indeed, a white woman. For years, she’s peddled this racial hoax that she was part of the Cherokee nation. She recently released a DNA test showing that she’s…1/1024thNative America. By these standards, I’m also a Native American…and I have zero blood ties. Warren finally admitted she was just a white womanat a recent commencement address at Morgan State. The truth will set ye free, but the fact remains is that Warren thought she could culturally appropriate the Cherokee Nation and get away with it because she was a liberal. She committed one of the cardinal sins of American liberalism, and progressives appear to be moving on from her (via Politico):

Sen. Elizabeth Warren (D-Mass.), meanwhile, has seen her stock slide among the group‘s members, according to the poll released Tuesday and obtained first by POLITICO. The Massachusetts senator, whose success in similar polling four years ago propelled DFA to help organize a massive but ultimately unsuccessful effort to draft her into the 2016 presidential campaign — was running fourth.

Following the 2016 election, Sanders galvanized support by running “one heck of a fantastic presidential campaign,” said DFA’s current executive director, Charles Chamberlain, who will become chairman of the group in January. He said the straw poll exposes that Warren and Harris “have some work to do” to build support among progressives.

Yes, a bunch of white dudes are probably going to rise to the top of the 2020 Democratic polls. And then, cue the feminist outrage over that:

If only there was a term for someone who judges others exclusively by their race and gender... https://t.co/rDRAzeKl3R