WaPo: You Know, Those Trump Supporters Suffer From Problems...Below The Waist 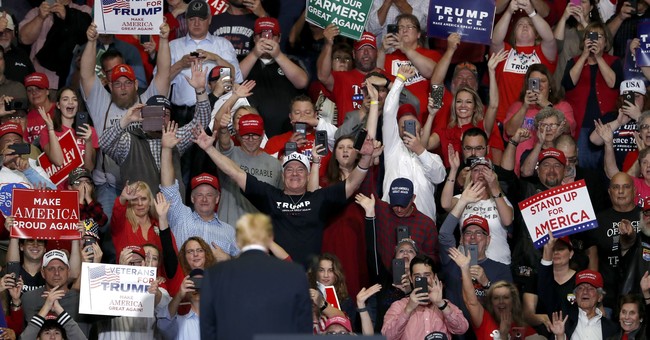 Is this a real article in The Washington Post? I mean it shouldn’t shock us that liberals think of new ways to show a) what insufferable cancers they are to this country; and b) why Trump won in 2016. This one is often lobbed at those who support Second Amendment rights; people must like guns because they’re compensating for something. It’s beyond idiotic. The newest frontier for the gun industry is women. In fact, women participating in shooting sports and obtaining gun permits are on the rise. They’re the fastest growing demographic of gun owners, so unless you’re going to accuse women of having penis envy, then this talking point deserves to have it throat slit.  You see, in liberal land, those who vote Trump have problems below the waist. Alas, we delve into “fragile masculinity.” Welcome to Snob Theater, presented to you by Liberal America:

From boasting about the size of his penis on national television to releasing records of his high testosterone levels, President Trump’s rhetoric and behavior exude machismo. His behavior also seems to have struck a chord with some male voters. See, for example, the “Donald Trump: Finally Someone With Balls” T-shirts common at Trump rallies.

But our research suggests that Trump is not necessarily attracting male supporters who are as confidently masculine as the president presents himself to be. Instead, Trump appears to appeal more to men who are secretly insecure about their manhood. We call this the “fragile masculinity hypothesis.

Measuring fragile masculinity poses a challenge. We could not simply do a poll of men, who might not honestly answer questions about their deepest insecurities. Instead we relied on Google Trends, which measures the popularity of Google search terms. As Seth Stephens-Davidowitz has argued, people are often at their least guarded when they seek answers from the Internet. Researchers have already used Google search patterns to estimate levels of racial prejudice in different parts of the country. We sought to do the same with fragile masculinity.

We found that support for Trump in the 2016 election was higher in areas that had more searches for topics such as “erectile dysfunction.” Moreover, this relationship persisted after accounting for demographic attributes in media markets, such as education levels and racial composition, as well as searches for topics unrelated to fragile masculinity, such as “breast augmentation” and “menopause.”

interesting research in WashPost: How Donald Trump appeals to men secretly insecure about their manhood https://t.co/t4Z91nojSy

In conclusion: Toxic masculinity creates men with “fragile masculinity” but mocking men for having ED is okay and not toxic as long as they are Trump supporters.

I didn't vote for Trump, but if you think overlaying voting trends with Google searches for "penis size" is credible research worth publishing in one of the nation's biggest newspapers... you're being insulting and patronizing and making political divisions worse. https://t.co/COLIPCGo30

Yeah, I tried to spare you the condescending analysis—if you could call it that, because this is complete and utter bull crap I mean really? It just comes to show you how pathetic liberal America has become. They can’t stand that some unaccomplished, inauthentic, and total liar of a woman, who wouldn’t be where she is if it weren’t for her credibly accused rapist husband winning the presidency, couldn’t beat Trump in 2016. So, they go on a full character assassination mode on anything Trump, overreaching, making asses of themselves, and showing, ironically, why Trump won to begin with.  As annoying as this is, I hope they keep it. This is just another in-kind contribution to the Trump 2020 campaign. We need these reminders, which is that the left hates us—and why we should hate them just as viciously and aggressively. It’s not a time for healing, or coming together, or finding areas of common ground. There is more that divides than unites us. We are different, politically and culturally. It’s time to recognize that and start viewing the Democratic Party for what they are to this country: the enemy.

Share this on Facebook
Tweet
Firearms Reporter Brings Clarity to the 'Why Can We Shoot People in the Legs' Debate
Matt Vespa
What Officer Reardon Prevented Just Happened Somewhere Else: 13-Year Old Girl Charged with Murder
Rebecca Downs