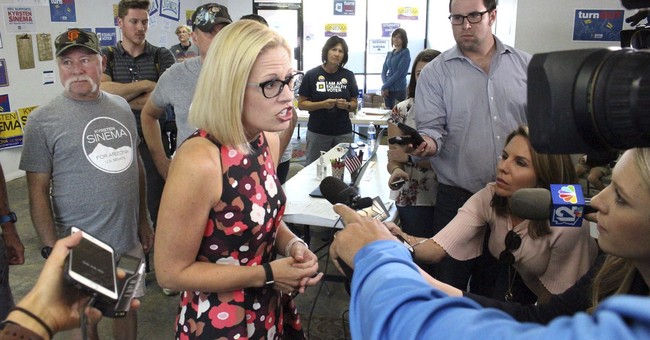 Are they bringing in these ballots by horse? That was something Storm mentioned on our Triggered podcast with Katie Pavlich this week concerning the painfully slow vote tallies coming out of Arizona. At the time, Democrat Kyrsten Sinema held a small lead, which has grown since Thursday. I know this is downer news for a Sunday, but as Brad Pitt, who played Oakland Athletics General Manager Billy Beane, says in the movie Moneyball, would you rather take one shot to the head or five to the chest when it comes delivering bad news (via The Hill):

Rep. Kyrsten Sinema (D) widened her lead over Rep. Martha McSally (R) in the heated Arizona Senate race after a new round of ballots were tallied in the Democrat's favor late Friday.

Sinema more than doubled her lead over McSally with Friday evening's latest tranche of results. The Democrat now leads her GOP challenger by 20,203 votes.

The vast majority of the votes tallied Friday came from Maricopa County, the state's largest county by population, where there were an estimated 345,000 uncounted votes prior to Friday's evenings results.

Right now, Sinema is up 1.5 points and some pollsters are saying it might be a lead that Republican Martha McSally cannot make up (via Politico):

Democratic Rep. Kyrsten Sinema has expanded her lead over GOP Rep. Martha McSally in Arizona after another day of ballot-counting in the state’s Senate race.

Sinema stretched her lead to 28,688 votes on Saturday evening as officials in the two most-populous counties, Maricopa and Pima, counted tens of thousands more absentee ballots, though that margin could shrink slightly if smaller counties where McSally has an edge report new totals later Saturday evening. Sinema now has 49.5 percent of the vote to McSally’s 48.2 percent, with hundreds of thousands more votes still left to count.

Sinema now up 1.5 points. Very hard to imagine a McSally comeback at this point.

Meanwhile, McSally continues to be in big league trouble in AZ...

Regardless, there are still hundreds of thousands of votes that are left to be counted (via AZ Central):

Pima County has 54,000 votes to be counted. This includes about 36,000 early ballots and 18,000 provisional votes. Pima is expected to update ballot totals on Saturday afternoon.

Pinal County has an estimated 26,800 ballots still to count, said Michele Forney, elections director. There are 6,800 provisionals left to count, she said, plus about 20,000 early ballots.

Coconino County has about 9,500 votes left to count, per the elections department there. About 1,800 of those are provisional votes.

Yet, As Lauretta wrote Friday, there are allegations of wrongdoing concerning how the votes are being counted:

In a Sunday letter, the GOP wrote to all of the recorders that “state law does not allow recorders to offer early voting after the Friday prior to Election Day except in specifically-defined emergency situations."

However, "the Maricopa County Recorder's Office offered 'emergency voting' from 8 a.m. to 5 p.m. Saturday and Monday for voters who could not make it to the polls on Election Day," according to the Arizona Republic. "The Recorder's Office said it allowed voters to determine what constitutes an emergency."

The GOP asked Fontes and other recorders to "identify and segregate" the ballots cast at emergency voting centers, thought to be about 3,000 in Maricopa County.

Lines says Fontes ignored their request and mixed the ballots.

So, say some prayers, because while this isn’t welcome news, the votes still need to be counted and this probably won’t end until next week, maybe later. They’re taking their sweet time, aren’t they?

UPDATE: The Cook Political Report's David Wasserman has a projection:

Projection: Rep. Kyrsten Sinema (D) has defeated Rep. Martha McSally (R) in #AZSEN. This thing has been over for a while.