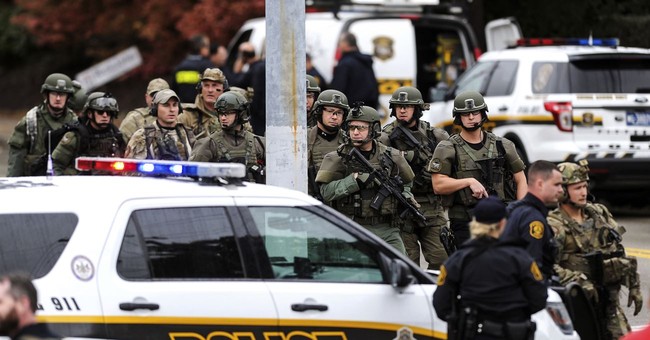 Yesterday was terrible. Eleven people were killed when an anti-Semite opened fire in a synagogue in Pittsburgh. Six others were injured. Of the six, four were police officers. We’ve also identified Robert Bowers as the suspect. He was shot and wounded by police, being taken into custody by SWAT team members as he reportedly tried to leave the synagogue (via WSJ):

A man who authorities said expressed hatred for Jews before killing 11 people and injuring six others during a Saturday morning synagogue service has been charged with 29 federal counts including hate-crime and firearm offenses.

Of the injured, four were police officers, Pittsburgh Public Safety Director Wendell Hissrich said. Two men are in critical condition, including a 70-year-old and a 55-year-old police officer. The rest are doing well and recovering, officials said.

The suspect, 46-year-old Pittsburgh resident Robert Bowers, made anti-Semitic comments including “all Jews must die” during an exchange of fire with police, according to a law-enforcement official.

The charges, which were detailed in a statement Saturday night by the U.S. Attorney in Western Pennsylvania and the FBI, include counts of obstruction of exercise of religious beliefs and firearm offenses.

Mr. Bowers, who allegedly carried an assault-style rifle and three handguns during the attack, sustained gunshot wounds from a shootout with police and is in fair condition at a hospital, officials said. He was confronted by police as he exited the temple, and then went back inside, where he was apprehended by SWAT team members, officials said.

Bob Jones, head of the Federal Bureau of Investigation in Pittsburgh, said the FBI believes the suspect acted alone. Authorities are searching his home and social-media accounts for further evidence.

Tim described this man and his actions perfectly: pure evil. President Trump, First Lady Melania Trump, Sen. Elizabeth Warren (D-MA), Pennsylvania Gov. Tom Wolf, and media figures all voiced their grief, disgust, and horror at yesterday’s shooting. Yet, there are some who just stoke up more division and insanity that is just not needed right now.

The folks over at Twitchy kept track of the nut jobs, so you didn’t have to, but Trump, law enforcement, and even our embassy move from Tel Aviv to Jerusalem were blamed for this attack. Trump being blamed is a given with those who despise him, but saying that he won because of law enforcement and that they have blood on their hands for this shooting, is straight up insane. Guardian reporter Mike Elk accosted veteran reporter Salena Zito, who has been covering Middle America for years, accusing her of being anti-Semitic, and said that she caused this shooting for reporting on Trump’s America. He later apologized…sort of. Oh, and anyone who criticized left-wing billionaire George Soros also has blood on their hands, or something.

“Soros” is shorthand for “the Jews” and anyone who has ever said anything about Soros has blood on their hands.

Can we stop gushing over law enforcement every damn time they stop a conservative extremist terrorist/mass shooter? For starters, they are simply doing their job. Secondly, and more importantly, cops are why we have Trump in the first fucking place. Blood is on their hands.

In middle of a somber moment at staging area while I was talking to a member of the Jewish community this @guardian reporter started screaming at me that I was an anti-Semite/that I caused shooting because I reports on Trump & to leave and kept screaming in my face to get out pic.twitter.com/t8shcgTR9W

I understand @mikeElk apologized by saying “if you were offended“
I can’t see his apology because he blocked me. Of course you offended me you screamed at me calling me an anti-Semite , blamed me for the shooting in front of people within the community & scared the heck out of me pic.twitter.com/yVMOulCrPE

Did I really just see a tweet about how Jews brought this on themselves by supporting Trump moving the embassy? Really.

Shattered. And the pain made sharper by the responses: blame the victims and boost the smear of the disloyal Jew; target & otherize prominent Jews; no effort to change our language. What a broken political culture. pic.twitter.com/o3EZJhctxE

We’ll be sure to revisit this on Monday—and all the horrible hot takes and insanity that’s brewing from the far left fringes of America about this tragic event. Whatever happened to this attack is an atrocity, and the person who did it is complete and total scum? Instead, we’re blaming the president, cops, and soft victim blaming with the Israel/U.S. embassy comments.