Oh, So This Is Why Democrats Are Very Nervous About Young Latino Voters 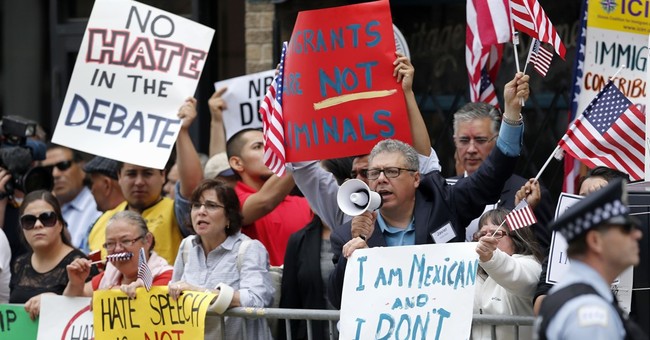 It’s a battle of narratives. It’s going to be a Democratic wave, or the GOP could defy history and retain its majority, albeit much slimmer in the House. The Senate is a different animal. It’s a GOP lock, with the possibility of Republicans actually entering the new Congress with 55 seats. If there is another Supreme Court nomination by President Trump, which is not out of the question, gone is the anxiety over confirmation. The GOP could lose its two moderates—Collins and Murkowski—and still confirm without any additional heartburn.

Yet, the blue tsunami could end up being low tide, and the reason for that will be because Democrats can’t get their people to the polls, especially young voters—young Latino voters to be exact. There are at least 30 House races where Latinos are a quarter of the population, but they’re not enthused to vote. As we mentioned before, this is becoming a rather big blind spot for Democrats. Bloomberg has more:

Just two weeks from Election Day, Democrats are agonizing about whether two groups of infrequent and liberal-leaning voters will turn out or dash their hopes of winning control of Congress: Hispanics and young Americans.

High turnout among Latinos and millennials is "absolutely pivotal" to the party’s prospects "and it’s of major, major concern," said Democratic pollster Celinda Lake. "I worry about whether we as Democrats have invested in the infrastructure we need to really mobilize that vote in 2018.

…low Hispanic turnout could sink Democrats in some House races the party sees as part of its path to the majority. There are 31 GOP-held districts where Latinos are at least a quarter of the population, according to the Census Bureau, including those held by Republicans Steve Knight and Jeff Denham of California, Will Hurd and John Culberson of Texas and Carlos Curbelo of Florida. All are major targets for Democrats.

"It’s just a really, really big question about who’s going to turn out to vote," Lake said. "We could lose Senate seats over it. We could lose -- the margin in the House could be greatly reduced. There are a good 15 seats where the millennial and Latino vote make a huge difference, could be the margin of victory."

…the uncertainty haunts Democrats. Signs of hope ahead of previous midterm elections didn’t translate at the ballot box with Latinos and young voters, who largely stayed home in 2014, 2010 and 2006. The historical trend in non-presidential elections is that voters are older, white and married, demographics that benefit Republicans.

The publication added that even with Trump's immigration agenda is seen as radical with more than a few in this community it hasn't motivated them to show up on November 6. As for young voters, well, Democrats shouldn’t put too much stock in their millennial wing. NBC News ventured into deep-blue California, UC Irvine to be exact, to see if anyone was excited to vote. Things turned out poorly, with one student saying she knows she should vote, but that the Democrats shouldn’t count on her to show up come Election Day.

Over at Real Clear Politics, they noted that a) this voter bloc is still very much competitive with both parties; and b) young Latino voter anger over Trump’s immigration agenda doesn’t mean they'll show up and vote:

Latino leaders say there is absolutely room for Republican candidates to gain ground with their voters. Domingo Garcia, national president of the League of United Latin American Citizens, said that past GOP leaders like George W. Bush and Mitt Romney appealed to Hispanic voters. Bush won 40 percent of that vote in 2004 while Romney took about 27 percent, according to Pew Research Center.

Many Latinos “are fiscal conservatives, [they] support the military, they’re pro-life — education — those are things Republicans could use, but those things get swept aside from the language from the White House,” said Garcia.

Trump’s language describing Mexicans who illegally cross the southern border as “rapists” and his tough policy on border security have made him — and therefore his party — less appealing. Yet, he did attract 1 percent more support than Romney did among the group, which analysts attribute to some Latinos’ strong backing of the GOP agenda.

With over 29 million Hispanics eligible to vote this year — 4 million more than in 2014, according to Pew — candidates will have to find a way to engage this group. Young Latinos are a key component, but only 16 percent of this demographic turned out in 2014. Some analysts say that this year, due to Trump, young Latino voters are particularly angry -- but that anger does not guarantee votes.

Right now, campaigns need to construct their final voter universes and spend money on people they know will show up. Better luck next cycle with these voters I guess: