October Surprise? Trump Is Preparing For A New Round Of Tax Cuts 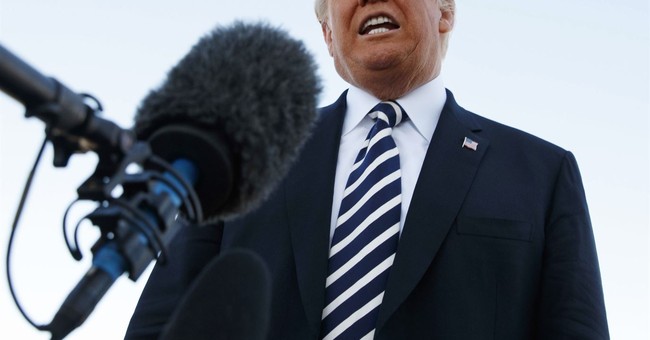 Is this an October surprise? Over the weekend, President Trump teased that a fresh new round of tax cuts are in the works and could be revealed before November. The package of tax cuts passed in December of 2017 hasn’t been an albatross around the GOP’s neck, which Democrats had hoped for heading into 2018 (they’re wrong about everything). It has increased in popularity, with the GOP taking the reins on trust in handling the economy. Second quarter growth is at four percent, over three million jobs created, three million working class families received bonus checks of $1,000 or more, small business and consumer confidence have reached 18-year highs, and U.S. worker pay has increased to its highest marks in a decade. Oh, and the Dow Jones is breaking records on a constant basis, with a 5,000-point gain in 2017—the largest annual gain in its history. Things are going well, but there’s a catch to these new proposed tax cuts—and it’s not necessarily hard to figure out (via Axios):

Trump has been promising major tax cuts since his presidential campaign. Axios' Jonathan Swan explains that although Congress could technically pass a tax cut in the lame duck session, Trump's proposal has no chance of passing any time soon. He can only announce such a move ahead of the midterms as Congress will remain out of session until after the election, which is just 16 days away.

The WSJ/NBC poll, to me, clarifies there is Kavanaugh effect of sorts, & it has been net positive for Republicans. Did it juice Democrats? Yes. But they didn’t need any more enthusiasm - Rs did, & it could make difference in competitive lean R House seats, never mind Senate.

So, they're not going to get it passed soon, but that’s not the point. The fact that Trump is talking about it, and GOP leaders are pushing it—is the message that needs to be sent. The GOP has been a little lackluster in selling the benefits of its economic agenda. While I’m not complaining that the vicious Supreme Court fight over Judge—no—sorry—Associate Justice Brett Kavanaugh gave the conservative a base a much-needed jolt, it shouldn’t have taken this long for Republican voters to get the message that the Democrats are jacked up. They hate us, and if they win, the Trump agenda’s momentum is killed. Voting Republican means supporting Trump. Period. And this new tax cut proposal touches on a winning issue for the GOP, which they should've jumped on this cycle. Let’s look back at The Wall Street Journal’s Kimberley Strassel, who said the data firm, who calmed the nerves of Sen. Ron Johnson (R-WI) in his 2016 re-election campaign, found that a great many of these competitive districts have an R+3 generic ballot advantage. Twenty-five percent of these voters were GOP persuadable, and the Trump tax cuts could be what decides how these voters break come Election Day:

Which is why the message that resonates most strongly by far with persuadable voters is a Republican promise that they will make permanent last year’s middle-class tax cuts. Rep. Kevin Brady, the Ways and Means Committee chairman, has introduced legislation to do just that—and it’s mind-boggling that Republicans haven’t already scheduled votes. Majority Leader Mitch McConnell doesn’t have 60 Senate supporters, but Republican candidates could use Democratic “no” positions to huge effect in their races.

Likewise, Republicans have an opportunity in highlighting the left’s more doolally ideas. Uncommitted voters reacted strongly against Democrats’ calls to abolish Immigration and Customs Enforcement, and strongly in favor of GOP promises to defund “sanctuary” cities and states, which refuse to follow immigration law. These were top messages for those crucial suburban voters, who have watched in alarm as urban violence creeps into their neighborhoods. (Interestingly, the other top suburban message was repealing ObamaCare.)

As for the Republican base, the poll finds they are driven most by Democrats’ threats to the presidency, the economy and constitutional rights. They will be inspired by Republicans who promise to protect the Second Amendment. They are likewise stirred by promises to defend Mr. Trump from the partisan impeachment effort that would inevitably accompany Democratic House control. And they want to hear Republicans vow to guard against intrusive and specific Democratic job-killing proposals—a $15-an-hour minimum wage, regulations on autos and drinking straws, government health care, etc.

I get that history was against the GOP in holding its current positions on the Hill. Losses were expected, but the chances of a full-blown takeover have slowly chipped away. The Senate is now a GOP lock. In fact, it may even gain four seats due to the Kavanaugh fallout. But the booming economy, the left-wing overreach on impeachment and Russia, abolish ICE, and the job-killing, high-taxes economic agenda of the Democrats is more than enough ammunition to take on House Democrats in competitive districts. It would seem that the GOP messaging problem is still a lingering thorn in the side of a party that had a lot of positives to run on this year, least of all another Supreme Court nominee confirmed by this president. If the GOP loses the House, it would be because, well, perhaps the leadership was not there. I don’t know, but there seems to be more than enough for the GOP to actually defy history and hold on to a slim majority…if it's marketed right.