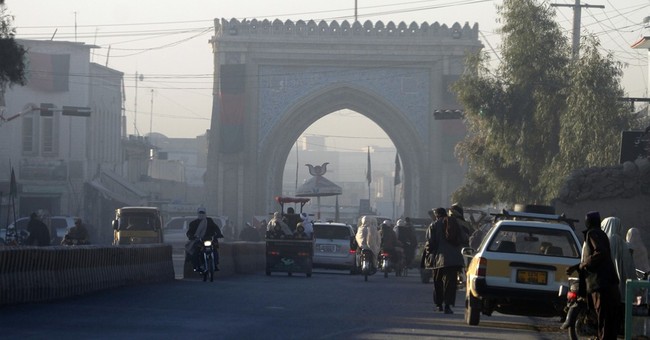 Afghanistan is a mess, and today’s headlines only highlighted this further. In Kandahar, the police chief, governor, and intelligence chief have been killed. Earlier reports said that their bodyguards turned on them, but The Washington Post reported that a Taliban terrorist donning an Afghan army uniform opened fire inside the governor’s compound. This was a very close call for our officials as well. Three Americans were wounded and the top U.S commander, Gen. Austin “Scott” Miller, was present but escaped unharmed. He was reportedly the target of the attack. The Afghan police chief, Abdul Raziq, was considered one of the most powerful men in southern Afghanistan, who was also a staunch U.S. ally and anti-Taliban (via WaPo):

A gunman wearing an Afghan army uniform opened fire Thursday on participants in a meeting with the top U.S. commander in Afghanistan, killing three top southern provincial officials and wounding at least three Americans, officials said. But Gen. Austin “Scott” Miller, the target of the attack claimed by the Taliban, escaped unharmed, they said.

Among those reported killed in the attack inside the governor’s compound in southern Kandahar province were the country’s top police general, Abdul Raziq, who was seen as the most powerful man in southern Afghanistan.

U.S. military officials confirmed that a U.S. soldier, a contractor and another civilian were wounded in the attack, which occurred shortly after a high-level meeting attended by Miller.

Initial accounts said the three senior Afghan officials were wounded in the shooting in Kandahar.

BREAKING: I can confirm that Kandahar's police chief, governor, and intelligence chief have all been killed. This is a huge blow. #Afghanistan

UPDATE 1: My source tells me the #Kandahar governor's bodyguards turned their guns on their own colleagues and U.S. military officials.

UPDATE 2: #Kandahar police chief and the intelligence head were killed immediately in the attack; governor died of injuries in hospital, my source says.

3 Americans, including a soldier, civilian and contractor, were wounded and had been evacuated, NATO says. #Afghanistan

Our ventures in this part of the world haven’t panned out. We dropped the ball here to invade Iraq in 2003. On both fronts, mishaps and miscalculations, especially on the notion of whether democratic ideals could take hold in a part of the world where this is an alien concept historically, along with the American public’s impatience, only compounded matters. We’ve wasted trillions in these ventures, along with thousands of American lives. Things have not died down or gotten better it would seem. The security and governing structure in southern Afghanistan just got wiped out.