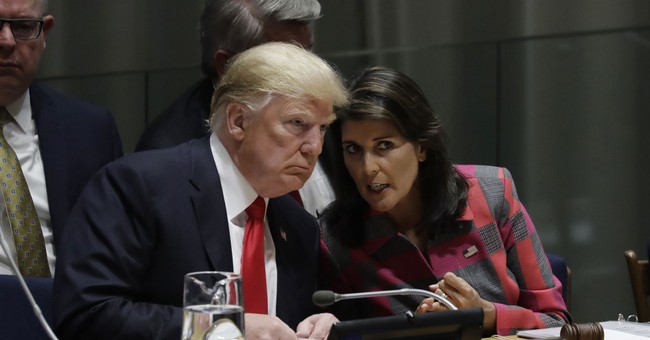 UPDATE: Haley wants to “take a break.” She will leave the administration at the end of the year. Trump knew this was going to happen. It was in the works for nearly six months. Sorry, Never Trumpers, she will not be running in 2020. She will be campaigning with the president to Keep America Great.

Trump tells reporters Haley can come back in any capacity

BREAKING: Nikki Haley is leaving at the end of the year, Trump says. She wants to “take a break.”

Pres Trump says @nikkihaley told him 6 months ago that she wants to take a break. Says UN Ambassador job even more intense than was her job as Governor of South Carolina. Says he hates to lose her, when she steps down at year's end.

Nikki Haley is saying it was an honor of a lifetime and that the US has become respected since President Trump was elected, per pool.

Nikki Haley: "No, I'm not running in 2020."
Tells reporters she will campaign for President Trump in 2020

We have reports from Axios that U.S. Ambassador to the U.N. Nikki Haley has submitted her resignation to President Trump. Jonathan Swan wrote that Haley discussed her resignation with President Trump last week. The news of her departure comes as a surprise to the foreign policy brain trust within the Trump administration. Swan added that the time in which she would officially leave is not known:

Big announcement with my friend Ambassador Nikki Haley in the Oval Office at 10:30am.

"I don’t agree with the president on everything. When there is disagreement, there is a right way and a wrong way to address it. I pick up the phone and call him or meet with him in person."

"Like my colleagues in the Cabinet and on the National Security Council, I have very open access to the president. He does not shut out his advisers, and he does not demand that everyone agree with him. I can talk to him most any time, and I frequently do."

"If I disagree with something and believe it is important enough to raise with the president, I do it. And he listens."

Haley will meet with President Trump in the Oval Office at 10:30 A.M. EST. It will be open to the press. Haley has been a bulldog for the administration's foreign policy in New York.

President Trump and Ambassador Nikki Haley will meet in the Oval Office at 10:30am this morning. This event will be open to the pool.

She was also a staunch defender of Israel, ripping other nations’ absurd criticism against the Jewish State—and the effete and nonsensical dynamics of the institution's various councils.