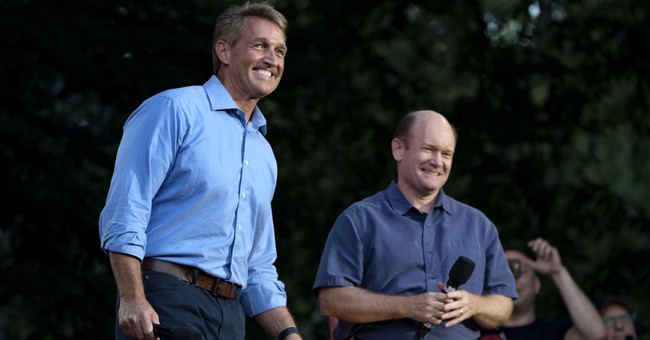 As if the initial vote wasn’t bad enough, we need to have a CBS News special on it. "60 Minutes" decided to do an in-depth segment on when Sen. Jeff Flake (R-AZ) decided his true friends were on the Democratic side of the aisle. The idiocy of this move is beyond comprehension. Flake is not heroic. He’s a traitor. He’s a disgrace to the Republican Party. He allowed Democrats to beat him into submission and prolong the left wing smear campaign against Brett Kavanaugh.

Flake said he would vote to advance the Kavanaugh nomination, but requested a weeklong delay for the FBI to investigate the three allegations of sexual misconduct that are lacking in evidence and witnesses. With Sens. Collins, Murkowski, and Manchin backing the motion, the White House was forced to request another FBI investigation. Nothing will be conclusive and Democrats will again cause for a delay. Jeff, they don’t want Kavanaugh on the Court. That’s the end game, along with using him to stoke the base for the 2018 midterms. If Democrats clinch a majority after Election Day it’s over. No more Trump appointees at least until 2020 if he’s able to win re-election. Liberals cannot allow abortion to be threatened; conservatives want a solid majority on the Court for the next generation. This is why it’s so nasty. Republican adherence to protocol, tradition, and this principle that we’re not enemies with Democrats has bitten us in the ass too many times. These aren’t good people. They’re trash. The only thing we share in common with these…people is that we use the same tax form. There is nothing we share with Democrats. Nothing. And that’s not a bad thing. The enemy must have distinctive marks in order for us to search and destroy them, or at least in theory—Republicans are still weak kneed in the practice of taking political scalps.

That’s what Democrats are doing to Kavanaugh. Besides the baseless sexual misconduct claims, they’re using everything in the book to destroy this guy; he’s an angry Irish Catholic conservative, who drinks too much and preys on women. Gee—I didn’t realize we’ve gone back to 1840s America. Yes, I’m pretty sure the Catholic aspect is another point that worries Democrats. Just look at the treatment of Amy Coney Barrett. But Jeff is a nice guy, which is why he’s the biggest sucker in politics right now, and one who cannot get the hell out of this town fast enough after this stunt (via CBS News):

Sen. Jeff Flake: I don't think anybody expected, you know, what happened on Friday to happen. And I can't say that I did either. I just knew that we couldn't move forward, that I couldn't move forward without hitting the pause button. Because, what I was seeing, experiencing, in an elevator and watching it in committee and just thinking, this is ripping our country apart.

Scott Pelley: What happened in the elevator?

Sen. Jeff Flake: (LAUGHS) People felt very strongly about the hearings and what was going on.

Woman to Flake in elevator: What you are doing is allowing someone who actually violated a woman to sit on the Supreme Court. This is not tolerable.

Flake had just announced that he would vote for Kavanaugh. The people who felt so strongly were activists Ana Maria Archila and Maria Gallagher who told Flake they were survivors of sexual assault.

Woman to Flake in elevator: Look at me and tell me it doesn't matter what happened to me.

Sen. Jeff Flake: They were clearly passionate and determined that I hear them.

Scott Pelley: I'd like to ask both of you what you made of Judge Kavanaugh's very emotional response and what it may or may not say about his judicial temperament. Does this man belong on the Supreme Court?

Sen. Chris Coons: He had exchanges with Senator Feinstein, with Senator Klobuchar, with others, that I thought went over a line. He was clearly belligerent-- aggressive, angry.

Scott Pelley: Made you wonder about his suitability?

Scott Pelley: But Sen. Flake, you identified with it. You understood--

Sen. Jeff Flake: Well, it did-- it seemed partisan. But boy, I had to put myself in that spot. And-- you can-- you can understand why he was angry. And you know, I think you give a little leeway there.

Sen. Chris Coons: I was outside the hearing room, probably, about the same time he was having that conversation in the elevator. And a reporter showed me that Jeff had announced he was gonna vote for Kavanaugh. And I was very upset, I mean, hugely distraught by that, because I was still hoping there might be some moment here.

Despite Flake's announced support of Kavanaugh, Coons tried to offer a compromise: the week-long investigation to be led by the FBI.

Sen. Chris Coons at hearing: And I have conveyed to my friends and colleagues that I had wished we would take a one-week pause, one week only.

Scott Pelley: When you were making that compromise proposal, you were lobbying your friend, Sen. Flake. You didn't expect to change the minds of other Republicans. You were trying to change one mind.

Sen. Chris Coons: I was, principally, concerned about helping my friend listen to his doubts and his conscience.

Sen. Chris Coons: And I cannot tell you how grateful I am. Jeff's the hero here. He's the person who-- wanted a moment just to-- just to, you know, go over, what are the legitimate concerns and grievances by Republicans on the committee about the process and the complaints and how we got here?

After Democratic Sen. Coons floated his compromise, Republican Jeff Flake stood up and walked from the Republican side of the dais to the Democratic.

Scott Pelley: Sen. Coons, there is a moment in the hearing in which Sen. Flake walks by, essentially taps on your shoulder and the two of you walk-out. What happened when you walked out of the room?

Sen. Chris Coons: I followed Jeff into the anteroom and he said very intently, "This is tearing our country apart." We have to do something.

Yeah, welcome to politics of today, Jeff. There are two sides. Pick one. Glad to see you actually had the temerity to pick a side. You threw your lot in with the Democrats. That’s fine. You’re a Benedict Arnold to the GOP—and you deserved to be trashed for this 11th hour reversal. Sen. Coons thinks you’re a hero to your face, but everyone knows he fooled you. You have placed a conservative victory, the largest in a generation, in jeopardy. I hope the media hit was worth it, Jeff. We all see you as a weak sauce moderate who would rather screw over his party because of this yearning to go back to the old days. It’s gone. They’re dead. And if you think Coons and the Democrats are your pals, just remember Julius Caesar who thought Brutus was his friend. What happened there? He got stabbed in the back—literally.

Leave it to a moderate to clip us as he approaches the end zone.