ICYMI: A California Judge Ruled That The Sanctuary State Law Is Unconstitutional 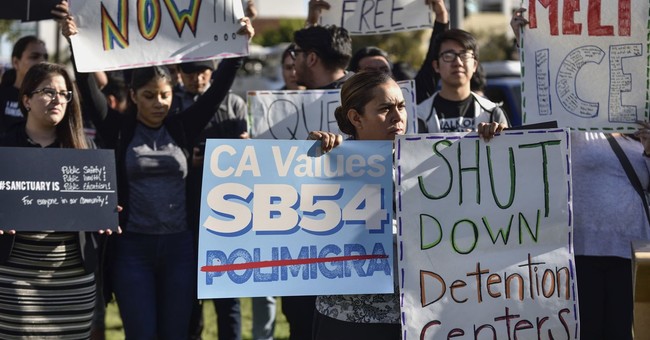 California gave the Trump White a huge middle finger when they decided to become a sanctuary state. The whole state would be a haven for illegal aliens. It showed how far the left have lurched on immigration, and on policy in general, and the where the Democratic base really lies on this issue. It’s sort of hard to argue against the notion that they’re for open borders. Democratic Gov. Jerry Brown signed it into lawin October of 2017, but now a California judge ruled that it’s an unconstitutional law. It dropped this week, but was drowned out with the ongoing Supreme Court fight over Brett Kavanaugh (via ABC7):

The Superior Court judge said the law violates the rights of charter cities.

The ruling comes in response to a challenge from Huntington Beach officials. The city opposed the controversial law, arguing it infringes on local governments' authority. The judge agreed, saying cities must be allowed to police themselves.

The law bars some cooperation between local cities and federal officials enforcing immigration laws. Exceptions include cases that involve violent or serious felonies.

How did the state respond? By giving its own charter cities, the finger, saying they will uphold the pro-illegal alien law (via LA Times):

Despite an Orange County judge’s ruling this week that California’s so-called sanctuary protections for immigrants who are in the country illegally are unconstitutional as they apply to charter cities, state Atty. Gen. Xavier Becerra said Friday that the state would continue to uphold its laws.

“Preserving the safety and constitutional rights of all our people is a statewide imperative which cannot be undermined by contrary local rules,” Becerra said in a statement. “We will continue working to ensure that our values and laws like the California Values Act are upheld throughout our state.”

Jennifer Molina, press secretary for the attorney general’s office, declined to comment on the likelihood of an appeal.

Huntington Beach on Thursday became the first city to successfully challenge the California Values Act, also known as Senate Bill 54, after Orange County Superior Court Judge James Crandall affirmed that the law violates its local control as a charter city — one governed by a charter adopted by local voters.