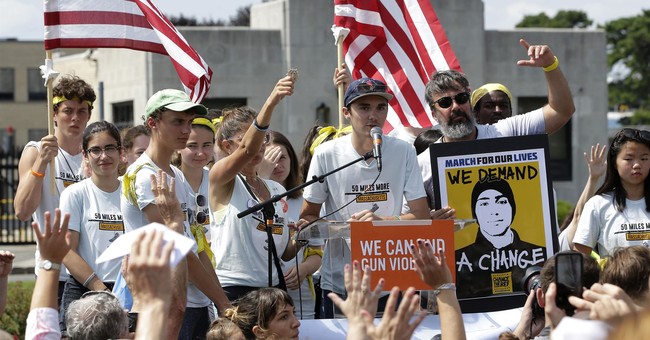 So, any time there’s a mass shooting, the anti-gun Left jumps for glee: another opportunity to fundraise, attack Republicans, and make the case yet again for why we need “common sense gun control,” which really means gun bans and the repeal of the Second Amendment. They tout misinformation, push narratives with shoddy data, and partake in our favorite game: not knowing what the current gun laws are and pervasively screw up on gun lexicon. Part of it is just plain ignorance, and part of it is also refusing to accept facts that undercut the narrative. The school shootings data point is pushed hard-core among anti-gunners. It’s total trash.

First, school shootings are still rare. Our schools have never been safer. It’s not the Wild West. EvenThe Washington Post called out Everytown for saying there were 18 shootings thus far back in Februaryafter the tragic Marjory Stoneman Douglas shooting:

It is a horrifying statistic. And it is wrong.

Everytown has long inflated its total by including incidents of gunfire that are not really school shootings. Take, for example, what it counted as the year’s first: On the afternoon of Jan. 3, a 31-year-old man who had parked outside a Michigan elementary school called police to say he was armed and suicidal. Several hours later, he killed himself. The school, however, had been closed for seven months. There were no teachers. There were no students.

Also listed on the organization’s site is an incident from Jan. 20, when at 1 a.m. a man was shot at a sorority event on the campus of Wake Forest University. A week later, as a basketball game was being played at a Michigan high school, someone fired several rounds from a gun in the parking lot. No one was injured, and it was past 8 p.m., well after classes had ended for the day, but Everytown still labeled it a school shooting.

Now, National Public Radio dug into the 2015-2016 Department of Educations numbers on school shootings. The department said that 240 school shooting occurring during that period. The funny thing is that NPR found that two-thirds of them never happened. Oh, and there were other issues as well.

This spring the U.S. Education Department reported that in the 2015-2016 school year, "nearly 240 schools ... reported at least 1 incident involving a school-related shooting." The number is far higher than most other estimates.

But NPR reached out to every one of those schools repeatedly over the course of three months and found that more than two-thirds of these reported incidents never happened. Child Trends, a nonpartisan nonprofit research organization, assisted NPR in analyzing data from the government's Civil Rights Data Collection.

We were able to confirm just 11 reported incidents, either directly with schools or through media reports.

In 161 cases, schools or districts attested that no incident took place or couldn't confirm one. In at least four cases, we found, something did happen, but it didn't meet the government's parameters for a shooting. About a quarter of schools didn't respond to our inquiries.

Most of the school leaders NPR reached had little idea of how shootings got recorded for their schools.

For example, the CRDC reports 26 shootings within the Ventura Unified School District in Southern California.

"I think someone pushed the wrong button," said Jeff Davis, an assistant superintendent there. The outgoing superintendent, Joe Richards, "has been here for almost 30 years and he doesn't remember any shooting," Davis added. "We are in this weird vortex of what's on this screen and what reality is."

So, for all of you who think that government should be more involved in gun violence research, which will be biased and will be politicized and used to chip away at constitutional rights, here’s your answer. When government sharpens the data collection, maybe we can have a discussion, but even then I’m dead setagainst liberal academia being given taxpayer dollars to fund anti-gun studies. You know that’s how the data will be used. For now, asking basic about school shootings by the government is a mess [emphasis mine]:

In the 2015-2016 school year, "Has there been at least one incident at your school that involved a shooting (regardless of whether anyone was hurt)?"

The government's definition included any discharge of a weapon at school-sponsored events or on school buses. Even so, that would be a rate of shootings, and a level of violence, much higher than anyone else had ever found.

A separate investigation by the ACLU of Southern California also was able to confirm fewer than a dozen of the incidentsin the government's report, while 59 percent were confirmed errors.

So, if the Left wanted to use the DOE as a talking point to push their odious anti-gun agenda, think again. At the same time, please do—we can make fun of you later.