'Are You F**king Kidding Me?' MD Democratic Gubernatorial Candidate Snaps When Asked If He's A Socialist 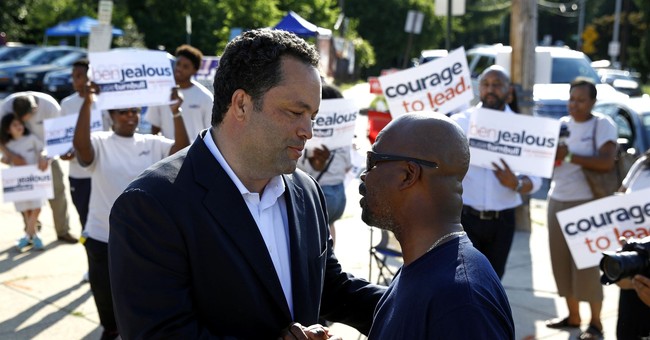 Maryland Democratic gubernatorial candidate Ben Jealous was not happy over one question from a reporter, who asked if he identified as a socialist? The incident occurred last week. Incumbent Republican Gov. Larry Hogan, who is likely to cruise to re-election despite Maryland’s deep blue roots, had described Jealous as a far left socialist.

“Are you f**king kidding me?” snapped Jealous.

Democratic Maryland gubernatorial candidate Ben Jealous snapped at a reporter who asked him repeatedly Wednesday if he identified as a socialist, saying, "Are you f—ing kidding me?"

Republican Gov. Larry Hogan called Jealous a "far-left socialist" in an interview with the New York Times last weekend. Washington Post reporter Erin Cox noted to the strongly progressive Jealous at a press conference that Hogan had tagged him with the "socialist" label and asked for his response.

"You know, I about fell out of my chair when I read … that Hogan was out there calling me names, and then it occurred to me that him calling me a far-left socialist is what the Tea Party called President Obama. It's what Barry Goldwater called Martin Luther King," Jealous said.

He said Hogan's name-calling showed Republicans are "scared." Jealous said he was a venture capitalist who invests in growing businesses, before going on to attack Hogan as being "lazy" in bolstering Maryland's economy.

"Not to point too fine a point on it, but do you identify with the term socialist?" Cox asked.

"Are you fucking kidding me?" Jealous asked, laughing mirthlessly. "Is that a fine point? OK.

Jealous' running mate Susie Turnbull took the microphone shortly after and said Jealous was trying to run a "positive campaign." Jealous is the former president of the NAACP and has never held elected office.

It’s not an unfair question. Gallup noted that for the first time Democrats are more positive about socialism than capitalism. Sen. Bernie Sanders (I-VT) and his left wing minions, Alexandria Ocasio-Cortez being one of them, are scoring some impressive wins across the country. Universal health care, free college, and other left wing initiatives are increasingly becoming litmus tests for candidates. Mr. Sanders has endorsed Jealous. The Capital Gazette, which was the target of a tragic shooting from a crazy person who did not an article they had written about him in 2011, noted that Jealous’ agenda is simply unaffordable:

Ben Jealous breaks that mold in quite a few ways.

First, Jealous has no experience in government and barely any experience in Maryland politics. Jealous may have cut his teeth in activism and been President of the NAACP, but that’s no substitute for relevant experience in state politics and state government.

Jealous didn’t even become a registered voter in Maryland until 2013, spending the previous 13 years as a resident of the D.C. or California. Even after registering to vote, Jealous never voted a state gubernatorial primary until this year.

It’s incredible that Democrats could nominate somebody so inexperienced and unconnected to Maryland and Maryland politics as Ben Jealous.

The second big break is in policies. While Maryland Democrats have been drifting toward the radical left for some time, the nomination of Jealous is their great leap in that direction. Never before have Maryland Democrats collectively made the decision to embrace radicalism and socialism as they did in this election. 40 percent of the Democratic Party came together to nominate Jealous despite his plans for a rationed health care system that requires a $24 billion tax increase, to put Maryland’s public safety at risk, and a whole host of ideas that The Washington Post called “pie in the sky.”

It may be a once in a generation choice, but the choice is clear. Because Maryland can’t afford Jealous and his risky brand of socialism.