Choke On It, Liberals: U.S. Regains Rank As The World's Most Competitive Economy Under Trump 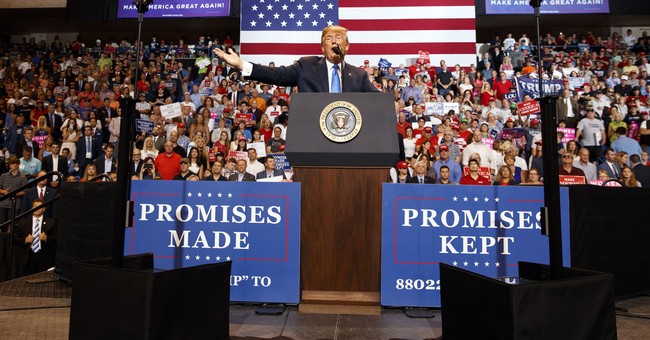 Oh, it’s a good day for sure. Ever since the Trump tax cuts became law, the U.S. economy has been booming. Second quarter growth reached four percent; wages for U.S. workers reached their highest levels in a decade. Unemployment is at an 18-year low, with confidence levels from the small business community and consumers reaching their highest marks in years. Over three million jobs have been created. There are now more jobs than there are job seekers, though in CNN-land—everything is on fire. That’s not the case. Real Americans see this; it’s overreach. Well, the jacked up economy has yielded another positive. It’s allowed the U.S. to regain its spot as the number one competitive economy in the world (via Bloomberg):

The U.S. dethroned Hong Kong to retake first place among the world’s most competitive economies, thanks to faster economic growth and a supportive atmosphere for scientific and technological innovation, according to annual rankings by the Switzerland-based IMD World Competitiveness Center.

The U.S., which reclaimed the No. 1 spot for the first time since 2015, scored especially well in international investment, domestic economy and scientific infrastructure sub-categories while earning below-average marks in public finance and prices.

And yet, this all falls on deaf ears with liberals. There’s not enough dynamite to stuff in these people’s ears to make them hear the truth. Trump’s policies are solid. They’re working. And voters are noticing. In liberal land, it’s pervasive fixation in a Russia probe that will never ensnare the president the way they want to, payments to a porn star that no one cares about, and more Russia this, that, and the other—all of which lack any evidence to suggest the Trump team colluded with the Kremlin during the 2016 election. Oh, and there’s Paul Manafort, who was indicted on charges unrelated to his work during the 2016 campaign. It’s up to you, folks. Don’t forget to vote in November.