'Move, Jim!': CNN's Acosta Pretty Much Told To Get The Hell Out Of The Oval Office (Again) 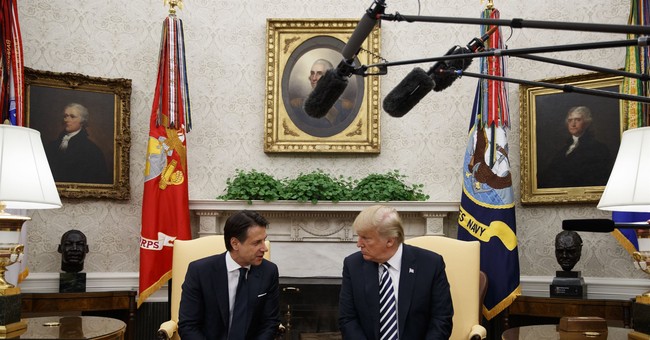 It seems CNN’s Jim Acosta just loves being trashed by the Trump White House. It does get him to complain on live television, as if he’s some martyr, a beleaguered journalist under the crushing regime of some authoritarian country. He’s not, but here was another instance where White House staffers had to more or less tell Acosta to get the hell out of the Oval Office. It was a press spray event. Italian Prime Minister Giuseppe Conte visited President Trump yesterday.

“This audio is a pretty good example of how the WH aides also known as press wranglers are almost screaming as reporters try to ask questions of Trump in our ‘pool sprays,’” he tweeted after the incident.

The press has been complaining about how Trump treats them. It’s a new world for them; we have a man who actually punches back—and his supporters love it. Even here they’ve overreached, claiming his attacks against the media is somehow dangerous to the country. Spoiler: it’s not. And a friendly reminder: it was Hillary Clinton who first coined the phrase “fake news,” not Trump. The New York Times’ publisher, A. G. Sulzberger, recently relayed his concerns to the president:

President Trump and the publisher of The New York Times, A. G. Sulzberger, engaged in a fierce public clash on Sunday over Mr. Trump’s threats against journalism, after Mr. Sulzberger said the president misrepresented a private meeting and Mr. Trump accused The Times and other papers of putting lives at risk with irresponsible reporting.

“I told the president directly that I thought that his language was not just divisive but increasingly dangerous,” said Mr. Sulzberger, who became publisher of The Times on Jan. 1.

“I told him that although the phrase ‘fake news’ is untrue and harmful, I am far more concerned about his labeling journalists ‘the enemy of the people,’” Mr. Sulzberger continued. “I warned that this inflammatory language is contributing to a rise in threats against journalists and will lead to violence.”

This is particularly true overseas, Mr. Sulzberger said, where governments are using Mr. Trump’s words as a pretext to crack down on journalists. He said he warned the president that his attacks were “putting lives at risk” and “undermining the democratic ideals of our nation.”

No, it’s not untrue. The liberal news media has peddled fake news. They reported that the bust of Martin Luther King, Jr. was removed from the Oval Office. That was crap. They said the National Guard would participate in rounding up illegal aliens. That was crap. They were appalled that Trump renamed Black History Month, National African American History Month, only to get a sledgehammer to the face because…Obama did the same thing when he was in office. The Federalist has more fake news stories that were peddled at the outset of this administration. Oh, and have we forgotten about ABC News’ Brian Ross botching of the Trump-Flynn-Russia story that tanked the markets last January?

Fake news exists. The liberal media establishment is anti-Trump and cannot be trusted period. And please, the press is not under threat like they are in under authoritarian governments. They just don’t like a president who fights back. They’ll just have to get use to it. And yes, there was a tragic shooting committed by Jarrod Ramos at the Capital Gazette in Maryland, but he's a crazy person, who had a beef with this local paper that dates back to 2011, pre-dating Trump's attacks on the media's well-established bias.

But back to the media whining about how they’re treated, have they forgotten that Hillary Clinton’ s posse roped them in like cattle in 2015?

At the Fourth of July parade Hillary Clinton marched in Saturday in Gorham, New Hampshire, reporters following the candidate were kept -- and at moments, dragged -- behind an actual moving rope line.

The rope, which two Clinton staffers held on to on either side, was meant to give Clinton space as she walked down the parade route, but photos of reporters being dragged behind the rope as she marched have gone viral on Twitter.