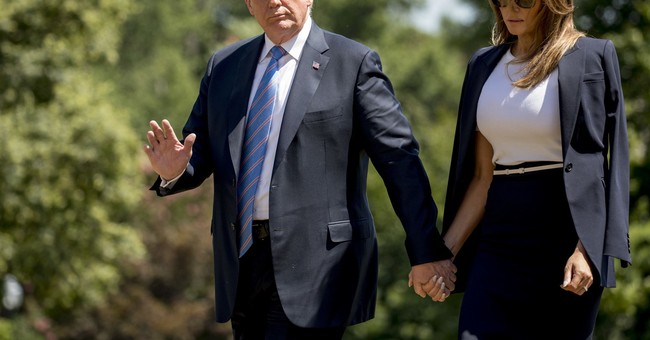 It’s not a top Republican. It’s not even a national one, but it offers insight into the weak sauce arguments for impeachment against Donald Trump; a nice window into this left wing pipedream to boot the president because…a lot of people didn’t like the results of the 2016 election. No, seriously—it’s getting ridiculous, folks. In Texas, State Rep. Jason Villalba outlined his reasons for why we need to impeach President Trump. Villalba is an outgoing lawmaker in the state legislature, as he was defeated in a primary held in March (via The Hill):

“Since Donald J. Trump has been president, he alone has increased the national debt by over $1 trillion. Yes. One trillion dollars. The fastest any president in U.S. history has accrued that level of debt,” Jason Villalba wrote in an editorial published by The Texas Tribune’s “TribTalk” on Wednesday.

“Our president has mocked and belittled our immigration laws, our intelligence agencies, our foreign policy strategy and even the American people. We have been called 'stupid,' 'weak,' ‘a joke’ and ‘pathetic,’ all by our own president," Villalba continued, adding that he was one of the “only Republican elected officials in the country to plead with the American voters to abandon this charlatan prior to his election.”

“For my transgressions, I was summarily unelected from the Texas Legislature. I have no regrets. I always do what I believe is right. That is not politically expedient, but it helps me sleep at night,” the lawmaker, who lost the GOP primary in Texas House District 114 in March, said.

“Today, we will stand with our better angels. We will stand with those who seek to transcend the common detritus of the ordinary and become citizens of that shining city on the hill that Reagan spoke of so long ago,” Villalba continued.

Yeah, this sounds like a swan song from the loser brigade, along with a nice pitch to get on national television. The liberal media has frothing at the mouth over Trump’s win since November of 2016. You don’t think they’ll give this guy a phone call? This whole screed reads from something conjured up by Democrats and the Democratic National Committee. While the anti-Trump wing of America whines, they miss the pitch. We’re about to hit four percent economic growth for the second quarter, three million jobs created since Trump was elected, more jobs than job seekers, 18-year low in unemployment, historic lows in black unemployment, strong jobs reports, small business confidence being at its highest in years, consumer confidence being at its highest in years. Despite worries of trade wars, the Dow Jones regained its lost ground, breaking 25,000 last Friday. In 2017, the Dow had a 5,000-point surge, the largest annual gain ever. Regulations have been cut. And tax reform has ushered in a new era of jobs and economic growth. Over three million workers have received bonuses averaging $1,000 or more, Over 250 companies have benefitted from the tax cuts. How is this bad news? How is this not what has been a linchpin in the GOP platform? Everyone is seeing good news. The ones who are down on America over an election result need to have their lips sewn shut with steel wire, finished off and held together with a healthy coat of liquid cement.

Trump won. He’s surprised me. And he’s given the conservative wing most of what they wanted from a Republican White House. Who would you rather have in there…Hillary Clinton? I’d rather commit seppuku.

Also, it seems like this guy should switch parties, right?