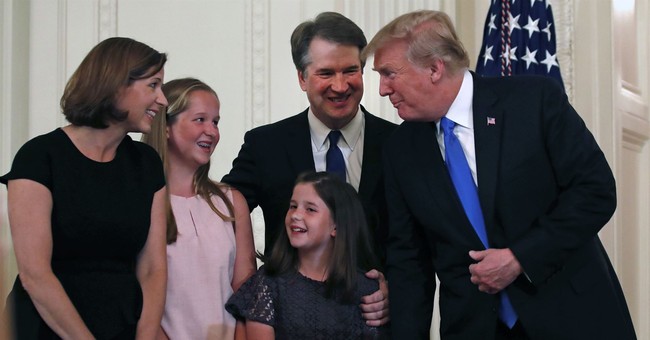 Yeah, the attacks against Judge Brett Kavanaugh are silly. They’re getting worse by the day, actually. Kavanaugh was nominated on July 9 to fill the vacancy that is going to be left by outgoing Justice Anthony Kennedy, who retired not long after the conclusion of the 2017 SCOTUS term. Liberals went into full meltdown mode. They still are—and what they’re coming up with to try and disqualify Kavanaugh is some grade-A stuff. And by that, I mean it’s a total joke. Apparently, it’s not good that Judge Kavanaugh goes to baseball games. And now, it’s “shameless” to say that he’s a good dad, specifically a good father to his daughters because he’s the spawn of Satan, or something (via HuffPo):

Yet we’ve been hearing an awful lot about these facts since Monday night when Trump introduced Kavanaugh, a 53-year-old federal judge, as his pick to replace Justice Anthony Kennedy on the high court. First from Kavanaugh himself. He spoke on Monday about coaching his girls’ teams and even bragged that the majority of his law clerks are women.

And then we heard more of this in a much-derided opinion column in The Washington Post published Tuesday, titled “I don’t know Kavanaugh the judge. But Kavanaugh the carpool dad is one great guy,” from Julie O’Brien, whose daughter goes to school with his elder daughter.

The whole enterprise pushes the narrative that this man is a friend to women. Maybe even a feminist. After all, he spoke winningly about how his mother “overcame obstacles” to become a trial judge — a signal, perhaps, that he understands the kind of systemic discrimination women once faced. He spoke of trying to bond with his daughters. Clearly, he must respect girls and women. Or at least that’s the message.

If Kavanaugh’s nomination goes through ? and there’s little reason to think it won’t ? he will be the fifth conservative on the court. And in this role, he will likely be very not nice to women.

Indeed, he is likely to gut reproductive rights for women. As an appeals court justice, he has already ruled against Obamacare birth control provisions and signaled a willingness to curb abortion access. He’s a favorite of conservatives, and anti-abortion groups have already signaled their pleasure about his selection.

Playing up Kavanaugh as some kind of gentle, good dad seems to be a fairly transparent effort to sidestep all this stuff. To try to make this man less terrifying by reassuring women that he’s a nice daddy.

I get the criticism, especially if you only read headlines. And that seems to be where this is at. But if you read both pieces they don't contradict each other. Also, to those of you criticizing me, I'm not sure "you look Jewish" counts as a thoughtful critique. https://t.co/mtr1mvdUlW

I read both articles. They contradict each other. "It’s an argument with fragile logic. Imagine extending it to other fathers." vs "...fathers learn as they watch their daughters grow up and confront the world. " https://t.co/tiLMWLJkaO

The stories definitely do seem to be quick in contrast of each other (and a little funny, sorry!). But I'm always open to listening and trying to understand your perspective. Also, sorry for any jerks that are jerks. We all have to deal with that

Emily Peck penned this post, though she caught some flak for writing about how men become less sexist once they have daughters:

For many men, having a daughter is a wake-up call to a notion most of us are already on board with: Women are human beings, just as capable as men.

The web is awash in blog posts from fathers earnestly explaining how having a little girl changed their feelings about women ? they’re not just pretty-smelling objects to be ogled, dads say. They face challenges because of sexism, fathers learn as they watch their daughters grow up and confront the world.

But the daughter effect isn’t merely anecdotal, and it doesn’t simply change men’s attitudes. It can also have profound economic consequences. A new study from researchers at Harvard offers perhaps the most compelling evidence yet: Venture capitalists who have daughters are more likely to hire women to work at their firms and those more diverse firms see improved financial returns.

In other words, the less sexist dads wound up making better business decisions.

Raising a girl isn’t always a game-changer for men. No one would mistake Pence or President Donald Trump for feminists. Yet it was at the urging of his daughter Ivanka that Trump included a paid parental leave policy as part of his draconian budget proposal last month. He’s the first Republican president ever to propose such a measure. On the flip side, his predecessor, former President Barack Obama, the father of two girls, was the first president to actually, explicitly call himself a feminist

Is this contradictory? Peck said her posts don’t conflict. You can debate that, but it’s yet another example of what we see from liberal media outlets on a daily basis: Democratic dad, politician, or president—Good, Republican counterparts bad. Our friends at Twitchy certainly caught some of the response to this piece. The thing is it’s so obvious that if Obama was president and he was nominating someone from his list, the being the good father aspect would have definitely been played up as a positive.

The Obama nominee in this example would have two daughters, which would harped as one of the reasons why contraception and abortion rights would be protected, understood, and empathized with this judge. Heck, he might even be played up as a feminist, an ally in the struggle or something. But because it’s Judge Kavanaugh so be very, very skeptical; he’s a wolf in sheep’s clothing about to overturn Roe v. Wade, or something. We have not come to that juncture yet.

This episode is just a friendly reminder of the BS they pull on a daily basis.