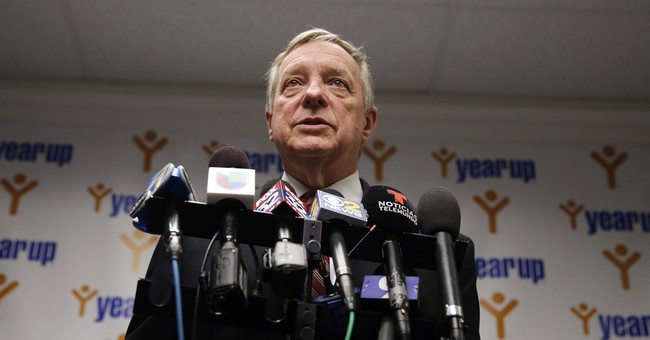 Sen. Dick Durbin (D-IL) is always someone you can count on to make a completely idiotic remark on matters that really have no connection to politics or history. In other words, they’re all whackjob remarks and the Illinois Democrat wasted no time trying to tie the frenetic rescue mission of the Thai soccer team trapped in caverns to...immigrant families “trapped in a bureaucratic cave.”

In Thailand, 12 members of a soccer team and their coach became trapped in a cavern system that is rapidly flooding due to the monsoon season. They’re about a mile or so underground, it’s pitch black, and the journey to extract them is no picnic either. Some reports say it’s around a 12-hour round trip from the extraction point to the site where rescue crews discovered the boys. One ex-Thai Navy Seal died when he ran out of oxygen. This is not related to our immigration policy, but in comes Durbin with this nonsense on "Meet The Press" over the weekend (via Mediaite):

Before even answering the first question of his Meet the Press interview, Sen. Dick Durbin (D-IL) took a moment to call attention to the soccer team stuck in a flooded Thailand cave, comparing the trapped boys to detained migrants in the U.S.

“Hearts and prayers are with those boys in Thailand, trapped in the cave,” he told NBC’s Chuck Todd. “I hope our hearts and prayers are also with thousands of children, toddlers and infants, removed from their parents by the Trump Administration, under zero tolerance. They’re trapped in a bureaucratic cave, too, so let’s not forget them.”

Folks, this is the Left. They will make you care. Even on things like a rescue mission, they try to attach a political rider. Yes, hope for the best. And so far, eight of the team members have been rescued. Four more, including the coach, remain, so this is good news. But this is just complete and utter nonsense. These kids were in the dark, with limited food and drinking water. Detained children, who are in this position because their parents were caught breaking federal immigration law, are in air conditioned tents, beds, with access to medical treatment, and three meals a day. Apparently, this is just like Auschwitz. This isn’t the only time Durbin has landed himself in the dumb a** department. Let’s not forget that in 2005, he compared U.S. troops accused of abuse to Nazis. Again, a comparison that is historically illiterate, but that’s the Democratic Party for you (via WaPo c. 2005):

Sen. Richard J. Durbin (D-Ill.) yesterday offered a tearful apology on the Senate floor for comparing the alleged abuse of prisoners by American troops to techniques used by the Nazis, the Soviets and the Khmer Rouge, as he sought to quell a frenzy of Republican-led criticism.

Durbin, the Democratic whip, acknowledged that "more than most people, a senator lives by his words" but that "occasionally words will fail us and occasionally we will fail words." Choking up, he said: "Some may believe that my remarks crossed the line. To them, I extend my heartfelt apologies."

He singled out the victims of the Holocaust, which Durbin called "the greatest moral tragedy of our time," as well as U.S. troops.