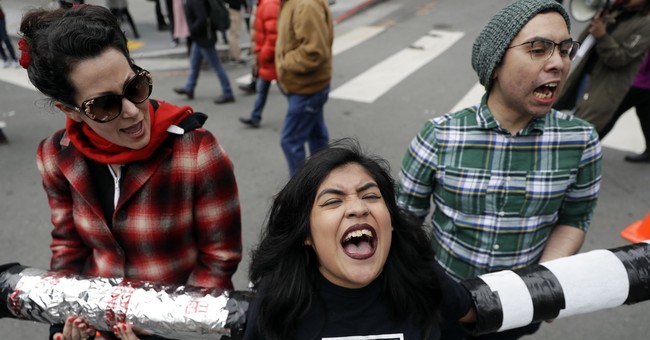 This is not a drill; abolishing Immigration and Customs Enforcement is the new rallying cry for the far left. Sen. Kristen Gillibrand (D-NY) called for it, as has New York City Mayor Bill de Blasio. Alexandria Ocasio-Cortez, who challenged and recently beat top Democrat Joe Crowley in a major upset last week has also called for it. Debra Haaland, who is the Democratic candidate for the 1stcongressional district in New Mexico, also supports abolishing the federal law enforcement agency. Rep. Mark Pocan (D-WI) has introduced a bill abolishing ICE—and you bet Sen. Elizabeth Warren (D-MA) is behind this policy push as well. Yet, while dissolving ICE may be turning into the progressive left’s latest crack cocaine addiction, Democratic pollsters are nervous that a) the position is too extreme (it is); and b) it plays right into the Republican Party’s hands (which it does) (via AXIOS):

Celinda Lake, longtime Democratic pollster, told Axios: "I worry that abolishing ICE tips the issues from humane treatment to security. The Republicans are already trying to move the issue in that direction."

Lake added: "Voters believe we need some enforcement of border security — not just for immigration, but for security. I wish we were pushing this to: 'We need comprehensive immigration reform.'"

Republicans are rejoicing at the notion of a new litmus test for Democrats, especially ones who have presidential ambitions in 2020.

Alex Castellanos, longtime adviser to top Republicans, said Dems are making the mistake his own party made after losing to Barack Obama: "[W]e became so weak, marginalizing ourselves to such an extreme, that an outsider business guy who had never run for office before, extinguished us all."

"That’s the danger for the Dems now. They are marginalizing themselves as they race against each other to win the gold medal for anti-Trump extremism. If they are not careful, some Silicon Valley billionaire, outsider — probably a woman — could clean all their clocks and steal their party right out from under them."

Where the debate is going ... A well-known Democratic strategist told Axios: "'Abolish' alone could be a political disaster, akin to Trump’s gutting the [Affordable Care Act] is for Republicans. … It suggests that Dem concern for undocumented immigrants goes beyond compassion and into irresponsibility."

The Democrats are heading for rocky shoals on this issue, so we shouldn’t stop them from running aground on this. Their alternative is not popular. Catch and release is not a popular policy position, though the LA-NYC-San Francisco media bubble is drumming up enough noise to make it seem the opposite. In fact, the cream of the Democratic base opposes catch and release as well. Byron York of The Washington Examiner also said that President Trump’s immigration policy, despite left wing and media hysteria, is not extreme at all—based on polling from Clinton’s old crew:

The new survey is a Harvard-Harris poll, by former Clinton pollster and strategist Mark Penn. It was conducted June 24-25, with 1,448 registered voters.

The vast majority — 88 percent — opposed separating illegal immigrant families while they are in the U.S., and they blamed the Trump administration for the policy. On the other hand, 55 percent (76 percent of Republicans, 39 percent of Democrats, and 55 percent of independents) said illegal immigrant families should be held in custody "until a judge reviews their case" — essentially the new Trump family detention policy.

The end result was that a substantial majority said illegal border crossers, and the children they brought, should be returned to their home countries. To that end, 80 percent (84 percent of Republicans, 79 percent of Democrats, and 78 percent of independents) favored hiring more immigration judges "to process people in custody faster."

…Penn asked, "Do you think we need stricter or looser enforcement of our immigration laws?" Seventy percent (92 percent of Republicans, 51 percent of Democrats, and 69 percent of independents) said stricter, while 30 percent said looser.

Penn asked whether respondents "support or oppose building a combination of physical and electronic barriers across the U.S.-Mexico border." Sixty percent (92 percent of Republicans, 39 percent of Democrats, and 54 percent of independents) supported the barriers, while 40 percent did not.

So, by all means Democrats (maybe more so the leadership), keep pushing the abolish ICE push. And yes, we already know you won’t be disciplined enough to craft a cogent, sensible alternative that isn’t fraught with anti-Trump extremism. You shut down the government over illegal aliens. Enough said.

Joe Bye-Done: WaPo's Article About Biden's Struggles Sure Does Drive a Dagger Into His Presidency
Townhall
Atlantic writer blames conservatives for *literally* bringing the US 'ritual human sacrifice on a mass scale'
Twitchy
Nancy Pelosi Makes a Panic Move and Sets up a Showdown With Her Own Party
Redstate
Meet 'Dr. Tarece' — and Pray for the Families in Georgia's Largest School District
PJ Media