Thank You, Liberal Media: Your Antics Have Only Further Entrenched Support For Trump 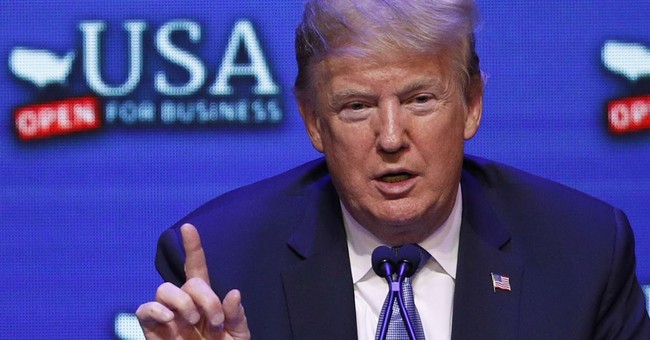 As many of you know, I was never a Trump supporter from the beginning. I am a proud Republican, and there was no way I was casting a ballot for Hillary Clinton; I’d rather eat my own hand. At the end of the day, any Republican is better than a Democrat. I’m a partisan. I’m open about it. You know what you’re getting when you come to Townhall. That being said, I do need to thank some very prominent people for pushing me hard core into the Trump camp: the liberal media. The pervasive hysteria they drum up every time the president does something is reaching biblical proportions.

And that nonsense is driving voters to defend the president, entrenching his base of support. For those on the fence about Trump, the liberal media’s theatrics, along with the recent quasi-lynch mob calls to aggressively confront administration officials everywhere, aren’t pushing them closer to the Democrats. In fact, Trump’s support with the GOP base is solid and he hasn’t had mass defections.  The Trump train rolls on stronger than ever before, fueled by the tears of the liberal media and the rest of their effete, sad, and pathetic man-children who cannot get over that old, sick, and corrupt Hillary Clinton will never be president (via NYT):

Gina Anders knows the feeling well by now. President Trump says or does something that triggers a spasm of outrage. She doesn’t necessarily agree with how he handled the situation. She gets why people are upset.

But Ms. Anders, 46, a Republican from suburban Loudoun County, Va., with a law degree, a business career, and not a stitch of “Make America Great Again” gear in her wardrobe, is moved to defend him anyway.

“All nuance and all complexity — and these are complex issues — are completely lost,” she said, describing “overblown” reactions from the president’s critics, some of whom equated the Trump administration’s policy of separating migrant children and parents to history’s greatest atrocities.

“It makes me angry at them, which causes me to want to defend him to them more,” Ms. Anders said.

In interviews across the country over the last few days, dozens of Trump voters, as well as pollsters and strategists, described something like a bonding experience with the president that happens each time Republicans have to answer a now-familiar question: “How can you possibly still support this man?” Their resilience suggests a level of unity among Republicans that could help mitigate Mr. Trump’s low overall approval ratings and aid his party’s chances of keeping control of the House of Representatives in November.

Mr. Trump has also retained support across a range of demographics other than the working-class voters who are most identified with him. This includes portions of the wealthy college-educated people in swing counties, like Virginia’s Loudoun, in the country’s most politically competitive states.

Many of these voters say their lives and the country are improving under his presidency, and the endless stream of tough cable news coverage and bad headlines about Mr. Trump only galvanizes them further — even though some displayed discomfort on their faces when asked about the child separation policy, and expressed misgivings about the president’s character.

“It bothers me that he doesn’t tell the truth, but I guess I kind of expect that, and I expect that from the media, too — not to always tell the truth or to slant it one way,” said Julie Knight, 63, a retired personal injury case manager from Algona, Wash.

Yes, the liberal media is owed a thank you for pushing a lot of people closer into the Trump camp, which has generated a booming economy. I don’t mind it. Tax reform, cutting regulations, pushing to streamline and consolidate government agencies, attacking Planned Parenthood, and protecting gun rights. Not too pleased with the initiative to ban bump stocks, but there won’t be so-called universal background checks, which is a backdoor to a gun registry, or magazine limits from this White House. Trump has given conservatives 85 percent of what they want on a legislative agenda as well. Why shouldn’t Republicans support him? Even those still skeptical of Trump have to admit that he’s been surprising. He’s cobbled together a solid conservative cabinet. He’s attacking the action items conservatives have long fought over on the Hill. In the process, we have the pervasive attacking of everything he does, which is coming off, rightfully, as utterly ridiculous. The liberals are the pain in the ass children that just need a little corporal punishment—and hopefully we can deliver two blows to them in 2018 and 2020.