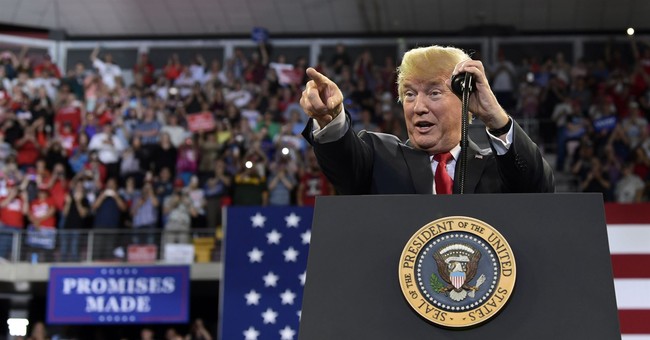 President Trump held a rally in Duluth, Minnesota last night. It was tremendous. I’m sorry. The man has a talent for this and he should keep on doing it. For hours, people waited to gain entry. Some were turned away at the Amsoil Arena. It was your run-of-the mill Trump event, but the president took aim at Democrats over their hysteria on immigration. The Left and their allies in the media have gone on a ‘we’re becoming Nazi Germany’ tear as of late due to the recent drama on the border, with illegal alien mothers and fathers being separated from their kids. Don’t come here illegally, yes—but this is the reality. The mood became so terrible that the White House caved, signing an executive order to keep illegal alien families together upon detention by immigration enforcement authorities. The Left is still mad because this isn’t about kids. It’s about freeing these illegal aliens

He slammed Democrats for wanting open border, no immigration enforcement, and fighting for illegal alien kids more than for actual American citizens (via RCP) [relevant portion being around 29-minute mark]:

"Today I signed an executive order," Trump said. "We are going to keep families together, but the border is going to be just as tough as it's been. Democrats don't care about the impact of uncontrolled migration on your communities. Democrats put illegal immigrants before they put American citizens."

"What the hell is going on?" Trump asked.

A few hundred supporters of President Trump are lined up inside a Duluth parking garage and skyway for a rally that starts in 9.5 hours... pic.twitter.com/kfb0Y1web7

Arena looks at capacity or close to it. @realDonaldTrump in Duluth. pic.twitter.com/xisqdiOJA3

So sorry, people wanting to get into the already packed arena - I LOVE YOU ALL! pic.twitter.com/PFvXrsvgkA

Current status outside the arena. The just let FIVE people in and then that door closed again. At capacity. #TrumpDuluth pic.twitter.com/s00Z4EN6D4

We’ve moved a bit closer, but people definitely will be turned away. Sounds like there is very little space left for those already going through security, and we haven’t gotten that far yet.

We have families being ripped apart by the opioid epidemic, murder, and even homicides committed by illegal aliens. Kate Steinle’s family know this all too well when an illegal alien shot and killed her on a San Francisco pier in 2015. The perpetrator, Jose Ines Garcia Zarate, had been deported five times before. Yet, there’s nothing from the Left. There’s no outrage because they don’t care. So, while the Left may have won this mini-battle concerning family separation, you can bet Trump will hammer home the fact that Democrats have never fought this hard for American families, especially those in the inner city. They bash police trying to keep order, they side with teachers unions giving kids crappy educations, and they work doubly hard to make sure illegals are well taken care of before any American it would seem. That’s going to stick, especially if the keep up the theatrics. It’s a sad day when wanting a strong border, immigration enforcement, and the rule of law make you a Nazi in the eyes of progressive America.