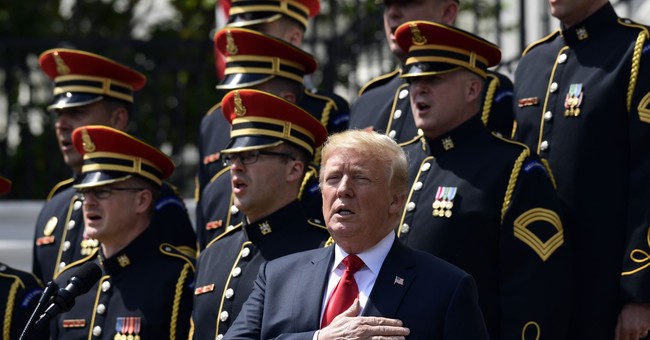 April Ryan, White House Correspondent for American Urban Radio Networks, stepped on a rake this afternoon claiming that President Trump was being booed when he was on the South Lawn to deliver remarks in a celebration for America. The event was originally going to be with the Philadelphia Eagles, the winners of last year’s Super Bowl championship game. They were disinvited by Trump over their position concerning the national anthem, and for the fact that reportedly only a handful of players planned on showing up. There are conflicting reports concerning the reasons why the White House rescinded the invitation.

During the celebration of America event, Ryan, in a now deleted tweet, said, “Breaking: Reporters on the South Lawn have confirmed the @realDonaldTrump was heckled and booed when he came out to celebrate America.”

This was not true. There was a heckler who was shouting at the president and was booed as a result. Noah Gray, a White House producer for CNN, called her out; Ryan is also a political analyst for the network.

This is not true. There was a protester who shouted at Trump and was booed. https://t.co/6zOSCifHFi

“This is not true. There was a protester who shouted at Trump and was booed,” he said.

The original breaking boo tweet was deleted as reporters on the South Lawn who told of the booign and heckling did not see all of what happened on the other side of the lawn. After the tape was watched the heckler was booed not @realDonaldTrump

So, this was a fake news story. No wonder why Press Secretary Sarah Huckabee Sanders said her credibility was higher than that of the media’s today.

Weird how you never make mistakes that put POTUS in a good light. Almost like you’re shamelessly dishonest or something. https://t.co/vs4ktNMiUw

Funny how @AprilDRyan never made these mistakes with Obama, either.

Thank you, Twitchy for capturing all the drama.