Sarah Sanders Slams the Press: Quite Frankly, My Credibility is Higher Than the Media's 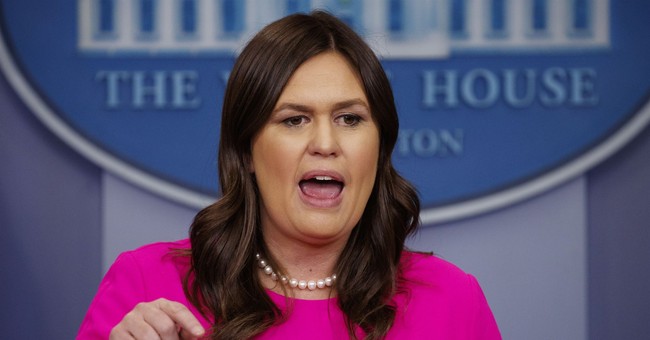 Press Secretary Sarah Sanders took on a number of questions from the White House press corps Tuesday afternoon about her credibility. Specifically, she was asked about a discrepancy surrounding a 2016 meeting between Donald Trump Jr. and a Russian lawyer at Trump Tower.

Last August, Sanders said on the record the President did not dictate a response to revelations about the meeting. However, a letter written by President Trump's legal team states he did in fact dictate the response onboard Air Force One last year, which was then given to the press.

"I work every single day to give you accurate and up to date information and I'm going to continue to do that. Frankly, I think my credibility is higher than the media’s. I think in large part that’s because you guys spend most of your time focused on attacking the president instead of reporting the news. I think if you spent a little bit more time reporting the news instead of tearing me down, you might actually see we're working hard to provide you with good information and to provide that good information to the American people.”

Sanders also got into a heated back and forth with reporter April Ryan, who shouted a question out of turn and demanded to know if President Trump is aware NFL National Anthem protests are also about police brutality.

"I let you rudely interrupt me and your colleague, I would be happy to answer if you would stop talking long enough to let me do that," Sanders said.

Must watch this exchange between @AprilDRyan & @PressSec

(The 50 second mark watch the journalist seated in front of Ryan) pic.twitter.com/yPRgAbPezO