DHS Secretary: Democrats Owe Trump An Apology For Peddling Lies About His Remarks On Immigrants 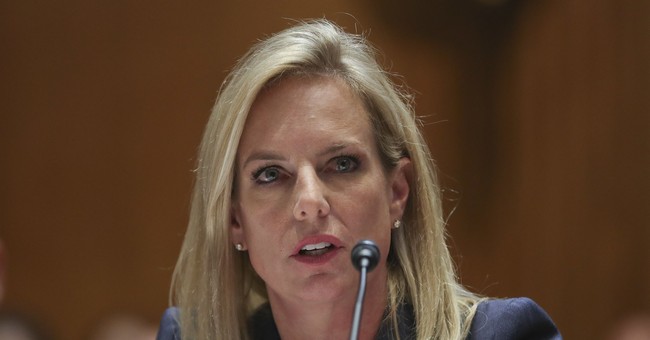 Katie wrote about this yesterday. President Trump had a roundtable discussion with those fighting sanctuary city policies that have become a protective shield for illegals to hide behind to avoid deportation. He called MS-13 "animals," but the liberal media decided to once again peddle fake news, erroneously claiming the president was saying this about all illegal aliens. Pavlich had the transcript:

SHERIFF MIMS:  Thank you. There could be an MS-13 member I know about -- if they don’t reach a certain threshold, I cannot tell ICE about it.

THE PRESIDENT:  We have people coming into the country, or trying to come in -- and we're stopping a lot of them -- but we're taking people out of the country.  You wouldn’t believe how bad these people are.  These aren’t people.  These are animals.  And we're taking them out of the country at a level and at a rate that's never happened before.  And because of the weak laws, they come in fast, we get them, we release them, we get them again, we bring them out.  It's crazy.

Yet, liberal idiocy reigned supreme. When it was finally realized that the president was, in fact, referring to MS-13, who are animals, the Left decided to argue that they’re still human. Once again, the president checkmated the Left and its media allies. He made them defend the indefensible.

"Actually, MS-13 gangbangers are still human beings" is not the hill to die on imho

Now, Department of Homeland Security Kirstjen Nielsen is asking Democrats who piled on the fake news train yesterday to hop off and apologize to President Trump. The DHS secretary added that she was “horrified” at how the record was being distorted (via Free Beacon):

Neilsen, appearing on "Fox and Friends," discussed the recent controversy triggered after media outlets inaccurately reported remarks the president made during a White House meeting Wednesday. Numerous media outlets reported Trump referred to all illegal immigrants as "animals," but in actuality, he used the term to specifically describe MS-13 gang members.

The secretary expressed that she was "horrified" by the distortion and the backlash it evoked, stating it was clear who Trump was referencing.

"I have to be honest," Nielsen said. "I was a bit horrified. The president was very clear; if you listen to the tape or if you were in the room, it was clear he was talking about MS-13."

"Personally, I think those lawmakers owe the president an apology," Nielsen said. "They are distorting facts in a very dangerous way. The president is trying to protect Americans. He's making clear that he will not stand for this violence in our communities and here you have elected members of Congress pretending that he's talking about something entirely different."

The media tried to hamstring Trump. They may have temporarily won the battle, but lost the war (again). It ended up blowing up in their faces, as scores of Democrats, unable to admit they made a mistake, argued that there might be some shred of humanity resting within the members this ruthless gang. No, they’re just animals. They’re thugs who need to be hunted down and brought to justice. This is about enforcing the law. It’s about protecting our citizens. It’s about law and order. One side wants this; the other side would rather trivialize and discuss feelings. And this is why Trump won.

Share this on Facebook
Tweet
Gavin Newsom Taken to the Legal Woodshed at SCOTUS. Again.
Spencer Brown
This is How the Biden White House is Trying to Convince White Conservatives to Get Vaccinated
Katie Pavlich
Poll Shows Ron DeSantis Came Out on Top After Smear From '60 Minutes'