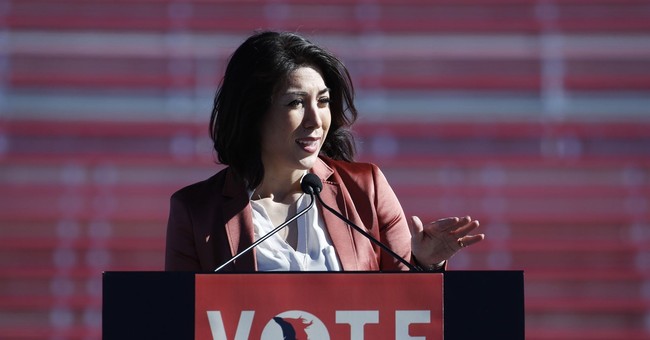 If you’ve ever seen the film V for Vendetta, where a futuristic Britain has been taken over by a fascist government, their slogan is “strength through unity, unity through faith” (it’s strength through purity, purity through faith in the graphic novel). That war cry seems to be applicable to the left-leaning insurgency that had a very Election Day. Last night, these candidates made a meal of the establishment, knocking off the more centrist candidates in primaries across the country. While Democratic enthusiasm appears to have stalled according to some polling, it was not apparent in these primaries. There were historic numbers of Democratic voters turning out in Idaho and Pennsylvania, the latter of which is key in the Left’s road to retaking the House. Also, Pennsylvania saw two hard core socialists win primaries for state house seats (via WaPo):

Tuesday was a terrible, horrible, no good, very bad day for Democratic moderates.

The success of very liberal candidates in primaries across four states is causing a new bout of heartburn among party strategists in Washington, who worry about unelectable activists thwarting their drive for the House majority. But it also reflects a broader leftward lurch among Democrats across the country since President Trump took office.

-- In Nebraska, a liberal social worker and political neophyte who built her campaign around “Medicare for All” scored a shocking upset in a Democratic primary to take on Rep. Don Bacon (R). Kara Eastman, 45, beat former congressman Brad Ashford, 68, in an Omaha-area district that national Democrats believed they could pick up in November.

Eastman advocated for universal background checks to buy guns, raising taxes and decriminalizing marijuana. “I’m tired of hearing Democrats don’t have a backbone, that we don’t stand for anything,” she said in a commercial that touted her support for universal health care. “That changes now!”

Ashford had the full-throated support of the Democratic Congressional Campaign Committee, which must now reevaluate whether to invest in the race.

-- In Pennsylvania’s Lehigh Valley, where GOP Rep. Charlie Dent’s retirement created a winnable open seat for Democrats, early front-runner John Morganelli — a district attorney who has been locally prominent for decades — lost the primary to attorney Susan Wild, who ran at him from the left. Morganelli, who opposes abortion rights and “sanctuary cities,” was attacked relentlessly on the airwaves for speaking positively about Trump and tweeting that he was open to taking a job in the administration during the transition.

In the Philadelphia suburbs, centrist Rachel Reddick — a 33-year-old Navy veteran endorsed by Emily’s List — lost the Democratic primary to take on Rep. Brian Fitzpatrick (R) after “proud progressive” Scott Wallace ran ads attacking her for being a registered Republican until 2016. Wallace, 66, is the grandson of Henry Wallace, who was Franklin Roosevelt’s vice president for a term and then ran against Harry Truman, who FDR dumped him for, from the far left in 1948. In a victory speech to supporters in Bucks County last night, Wallace declared: “Together, we can make America sane again.”

- Statewide, John Fetterman — a small-town mayor with a bristly beard and tattoos on both of his arms — toppled Pennsylvania’s incumbent lieutenant governor, Mike Stack, thanks in part to the strong endorsement of Bernie Sanders, who stumped across the state for him on Friday and Saturday. Fetterman campaigned on universal health care and legalizing marijuana.

-- In the Pittsburgh area, two card-carrying members of the Democratic Socialists of America topped incumbent state representatives in Democratic primaries with 65 percent and 68 percent of the vote, respectively. (The New Yorker profiled one of the winners, Summer Lee, last week.)

“Since it was founded in 1982, the Democratic Socialists of America has played virtually no role the country’s elections,” Clint Hendler writes for Mother Jones. “That’s begun to change, fueled by the organization’s 2016 endorsement of Bernie Sanders and a growth spurt led by the activists and organizers he inspired. In Pittsburgh, the local DSA chapter is 500 members strong and hosts Marxist reading groups, organizes against controversial anti-abortion pregnancy centers, and works to reduce police stops by fixing residents’ brake lights. … Pittsburgh’s DSA group is one of the first chapters in the country to have launched a political action committee …”

In Idaho’s Democratic gubernatorial primary, Paulette Jordan defeated business owner and Boise school board member A.J. Balukoff, who had the backing of most of the state’s political establishment. Jordan, who has generated a lot of media coverage because she could become the first Native American governor in the country, built her campaign around protecting more public lands, as well as promising to expand Medicaid, relax marijuana laws, reduce incarceration and limit corporate tax loopholes. She garnered 58 percent of the vote.

So, do we have to revisit the notion of a left wing Tea Party? I’m not there yet. For starters, once the proposals are fleshed out, like single-payer health care, support is sky high until you tell voters their employer-based plans would be eviscerated. You don’t really get a massive political movement going based on increasing the size of government, raising taxes, restricting speech, establish safe spaces and cry closets, and telling working people that they will subsidize the poor by keeping them in an endless state of dependency. At the same time, Bernie Sanders has filled that role, though free college, Medicaid for all, and raising the minimum wage continue to be lacking in enthusiasm outside of the Democratic base. It’s true that the Democratic voter advantage has collapsed, but remember, folks—it’s only May. And yes, if there is a lefty Tea Party centered around one man, Sanders, its shelf life will expire. It’s happened to the Tea Party, but before it died—it crippled the Obama agenda. No more plowing over Republicans to get Obamacare. That nonsense ended in 2010 and it’s final death occurred in 2014. That could happen with Trump, however. The moral of the story for the GOP: vote. Set your reminders. Start researching if your district has a competitive race, and even if there isn’t one—vote. Tax reform is on the line. Second Amendment rights are on the line. The progress this nation has made economically could be reversed under the regulations-riddled, high-tax garbage they’re mulling on the sidelines as we approach the midterms. I wouldn’t get comfortable just yet.