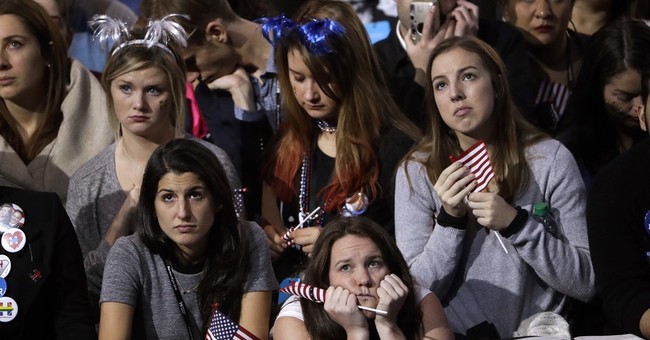 A progressive group, Wellstone Action, named after the late Sen. Paul Wellstone (D-MN) decided to axe two members from its governing board because they wanted to focus on winning back white working class voters. To make things even more intense, the two members removed from the board were the sons of the late Minnesota Democrat. In 2002, Wellstone died in a plane crash while campaigning for his re-election. His wife and daughter were also killed. Since then, Wellstone Action has trained thousands of liberal operatives and candidates. While we focus on Trump winning Pennsylvania, Michigan, and Wisconsin, which is a first for a GOP presidential candidate since the 1980s, the president also came within striking distance of winning Minnesota, missing it by a mere 1.5 percent. These areas are chock full of white working class voters who felt abandoned, marginalized, and denigrated by National Democrats (via Politico):

In the Democratic Party’s reckoning following the election of Donald Trump, an unlikely feud has erupted inside an organization at the heart of the progressive movement.

Earlier this year, the board of directors of Wellstone Action — an influential training group formed after Sen. Paul Wellstone’s death — dumbfounded Minnesota Democrats when it voted the late senator’s sons off the governing board.

The ouster came after the sons, Mark and David Wellstone, raised concerns about overspending in areas of the organization’s budget — and after a dispute over the direction and priorities of the group.

Still simmering three months after the brothers’ departure, the rift at Wellstone Action offers an unusually raw glimpse of a larger debate playing out among Democrats nationally as the party ramps up for the 2018 midterm elections and beyond. How to win back white, rural voters who went for Trump in 2016, while also courting an increasingly diverse electorate.

David Wellstone and other Democrats close to his father began objecting last year to what he described as Wellstone Action’s abandonment of disaffected Democrats in the rural Midwest — the rural poor were an early focus of the late senator — with an increasingly narrow focus on gender politics and people of color.

“I said, ‘After Trump, we’ve got to figure out how we are going to go back after those Democrats that we lost,” David Wellstone said. “We can do all the stuff we do. We do great stuff on communities of color, we’re doing great stuff on gender identity politics. But we need to do some of these other trainings. … Nobody wanted to have a discussion about that.”

It’s another mini-civil war within the Democratic Party. The debate between focusing on the increasingly diverse portions of the Democratic Party or reaching out to the millions of white working class voters who voted for Trump. There were also millions of Obama voterswho flipped for Trump as well. These voters are not hard core Republicans, though the Left is doing a good job keeping them in that camp with their pervasive bashing of Trump voters and their inability to give the 45thpresident credit for any of the positive economic news that have been a direct result of his policies.

Talk about jobs, job protections, better trade deals, and enforcement of immigration laws—and you’ll find how competitive a race could get out there. If that Democrat is anti-Nancy Pelosi and pro-gun rights, we’re off to the races, generally. Rep. Conor Lamb was able to win in a special election in Pennsylvania using that playbook.

It’s possible for Democrats to do both: maintain their ties to non-white voter blocs and reach out to white rural voters. The question is whether they can stomach doing it. National Democrats have long written off the concerns of rural voters. It bit them in the rear end two years ago. Despite gains, the GOP remains the dominant political force in the country. They control the White House, Congress, two-thirds of the governorships, 69/99 state legislatures, and have the most state lawmakers elected to office since the party was founded. To this day, the Left doesn’t understand that there is an America outside of the cities. Keeping the non-white voting blocs loyal to the party will fortify their urban strongholds, but will they be able to expand without white working class voters? No. Ironically, this group was a key part of the Obama coalition. If Democrats are content with the occasional special election win in rural America, and forever be a regional and coastal party, then this is the way to go: axing Democrats who want to do rural voter outreach. At the same time, it helps the GOP and the cultural biases of the country are doing a good job making that from the Left outreach all but impossible.