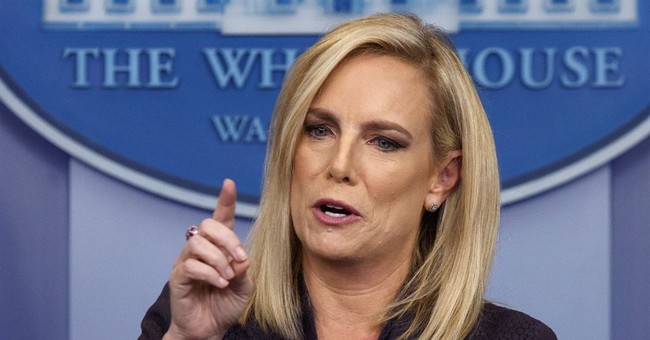 Department of Homeland Security Secretary Kirstjen Nielsen threatened to quit after having her spot blown up by President Trump in front of everyone at a cabinet meeting. Trump was reportedly not happy about the slow pace DHS was taking with regards to securing our borders (via NYT):

Kirstjen Nielsen, the homeland security secretary, told colleagues she was close to resigning after President Trump berated her on Wednesday in front of the entire cabinet for what he said was her failure to adequately secure the nation’s borders, according to several current and former officials familiar with the episode.

Ms. Nielsen, who is a protégée of John F. Kelly, the White House chief of staff, has drafted a resignation letter but has not submitted it, according to two of the people. As the head of the Department of Homeland Security, Ms. Nielsen is in charge of the 20,000 employees who work for Immigration and Customs Enforcement.

Mr. Trump’s anger toward Ms. Nielsen, who was sitting several seats to his left at the meeting, was part of a lengthy tirade in which the president railed at his cabinet about what he said was its lack of progress toward sealing the country’s borders against illegal immigrants, according to one person who was present at the meeting.

Asked about the heated exchange at the meeting, Sarah Huckabee Sanders, the White House press secretary, said Thursday that “the president is committed to fixing our broken immigration system and our porous borders.”

Tyler Q. Houlton, a spokesman for the Department of Homeland Security, disputed that Ms. Nielsen had drafted a resignation letter and was close to resigning, calling those assertions “false.

Listen, The New York Times has its biases. It has good pieces and bad. Nate Cohn is one of people I read when it comes to crunching election numbers, but overall, we’ve come to a point where we need to be extra skeptical about some of the reporting about this White House. CNN has their moment when they couldn’t report on Trump feeding koi fish with Japanese Prime Minister Shinzo Abe accurately. For the Times, it was reporting that Secretary of State Mike Pompeo was more or less derelict in his duty as our top diplomat, adding that European foreign officials were irked that their calls weren’t being returned. Yeah, maybe that’s because he flew to Pyongyang to secure the release of three American detainees. The headline is ridiculous as well, “At a Key Moment, Trump’s Top Diplomat Is Again Thousands of Miles Away.”

When President Trump made the surprise announcement in March that he would soon meet with the North Korean leader, Kim Jong-un, Secretary of State Rex W. Tillerson was thousands of miles away, an absence interpreted as a sign of Mr. Tillerson’s irrelevance.

Senior State Department officials were momentarily speechless on Tuesday when asked why Mr. Pompeo did not delay his trip by a day to be in Washington during Mr. Trump’s Iran deal announcement. Mr. Pompeo left for Pyongyang on Monday night.

So, let’s see what happens here.

The Failing New York Times criticized Secretary of State Pompeo for being AWOL (missing), when in fact he was flying to North Korea. Fake News, so bad!