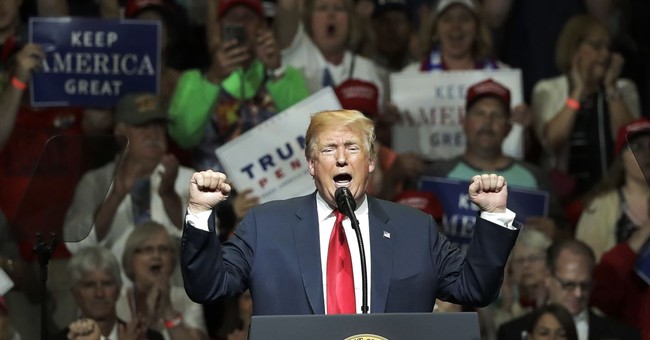 President Trump sure checked off all the accomplishments of his administration in a rally in Elkhart, Indiana. Speaking for over an hour, Trump touted the low unemployment numbers, especially for blacks, Hispanics, and women, and the release of American hostages from North Korea. He allowed Mike Braun, the winner of the Hoosier State’s Senate primary, to address the crowd against Sen. “sleepin’” Joe Donnelly, one of the most vulnerable Democratic incumbents this cycle.

The president also touted the beginning of the construction of the wall, the embassy being moved to Jerusalem, and the new slogan for 2020: Keep America Great. Trump added that we’re a nation that’s being respected again. It’s a new ball game. It wouldn’t have been a Trump rally without him ripping the news media, which he did when referencing a possible second term. The president said the fake news media might not like it, but on the other hand, they might be forced to since their ratings would go down once he left the White House.

Trump has been adamant that his base could not get complacent for the 2018 midterms, saying they can’t afford to be defeated in November. This rally, which I’m sure is one of many, serves as a reminder of that urgency.

Hoosiers deserve to know when @realDonaldTrump asked Joe Donnelly to support the policies that Indiana needs. Joe Donnelly voted no.

When the time came to cut your taxes, Joe voted no.

When the time came to repeal and replace the disaster of ObamaCare, Joe voted no. pic.twitter.com/huM8I6qy1w