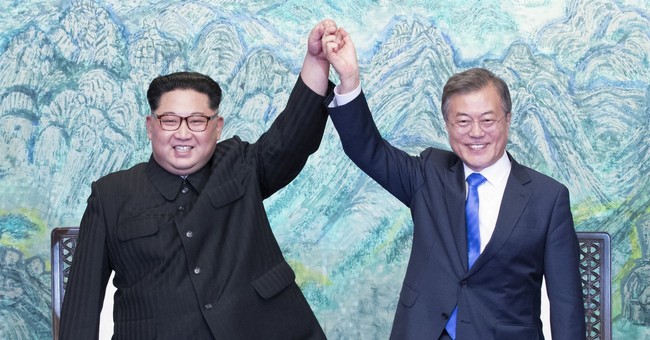 If there’s one thing about the Trump administration, it’s that there’s never a dull moment. Also, there are a lot of moments that you can file under “not under Obama” concerning domestic and foreign policy. We’ve all but defeated ISIS. Millions of working and middle class families benefited from the tax reform package in December, the economic growth has been better than originally projected, a better job-creating and investing climate has been created, and now peace has broken out on the Korean peninsula. Or at least that’s what’s been announced. The Korean War will officially end, a peace treaty is to be signed, and the peninsula will be nuclear-free (via NYT):

The leaders of North and South Korea agreed on Friday to work to remove all nuclear weapons from the Korean Peninsula and, within the year, pursue talks with the United States to declare an official end to the Korean War, which ravaged the two nations from 1950 to 1953.

At a historic summit meeting, the first time a North Korean leader had ever set foot in the South, the leaders vowed to negotiate a peace treaty to replace a truce that has kept an uneasy peace on the divided Korean Peninsula for more than six decades, while ridding it of nuclear weapons. A peace treaty has been one of the incentives North Korea has demanded in return for bargaining away its nuclear weapons.

“South and North Korea confirmed the common goal of realizing, through complete denuclearization, a nuclear-free Korean Peninsula,” read a statement signed by North Korea’s leader, Kim Jong-un, and the South’s president, Moon Jae-in, after their meeting at the border village of Panmunjom.

The agreements came at the end of a day of extraordinary diplomatic stagecraft emphasizing hopes for reconciliation and disarmament that was broadcast live around the world, beginning with a smile and handshake that Mr. Kim and Mr. Moon shared at the border and extending to a quiet, 30-minute talk they had near the end of the day in a wooded area of the village.

And whom can we thank for brining North Korea to the bargaining table? Well, that would be President Donald J. Trump—and that’s not conservative media saying this; it’s the South Koreans. CNN, the network so anti-Trump that they couldn’t accurately report on him feeding koi fish, added that South Korea’s foreign minister had this to say:

Speaking ahead of Friday's historic summit between the leaders of North and South Korea, Kang Kyung-wha told CNN that the US President had played a significant role in bringing the two sides together.

"Clearly, credit goes to President Trump," Kang told CNN's Christiane Amanpour in Seoul. "He's been determined to come to grips with this from day one."

Trump deserves the Nobel Peace Prize if this goes through, then. I mean it’s only fair since they gave Obama the same honor—and he escalated the war and our footprint in Afghanistan. The point here is that the media was wrong (shocker, I know). They said this man would start World War III. His tweets will cause a missile launch. This behavior is not conducive to diplomacy. These people can all suck it. Choke on all that crow, fellas. Also, Obama’s former top foreign policy adviser, Ben Rhodes, should just stop tweeting about his insights on such matters.

Trump has also hit North Korea with a series of sanctions after missile tests, which earned the North Korean dictator the nickname "rocket man" from Trump. The news media was scared about this. Again, they were wrong.