George H.W. Bush Admitted To Hospital With An Infection Hours After Laying Barbara Bush To Rest 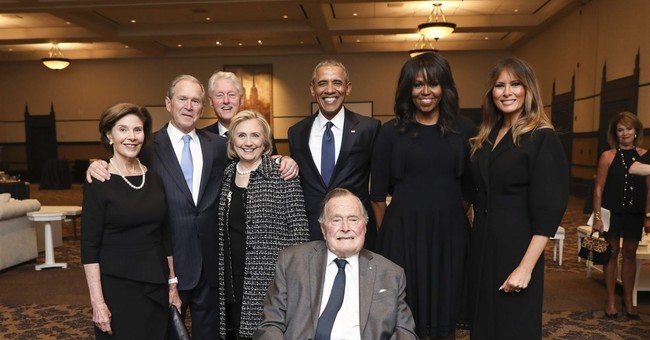 Jim McGrath said on Twitter that the 93-year-old Bush is “responding to treatments and appears to be recovering.” He was admitted Sunday morning to Houston Methodist Hospital after an infection spread to his blood, McGrath said.

Barbara Bush was laid to rest Saturday in a ceremony attended by her husband and former presidents Bill Clinton, Barack Obama, George W. Bush and their wives, along with current first lady Melania Trump. She was 92, and she and her husband had been married 73 years — the longest presidential marriage in U.S. history.

The elder Bush uses a wheelchair and an electric scooter for mobility after developing a form of Parkinson’s disease, and he has needed hospital treatment several times in recent years for respiratory problems.

Hours after the Bush family said their final farewells to former First Lady Barbara Bush, former President George H.W. Bush was admitted to the hospital with an infection. He contracted it on Sunday, which is said to have spread to his blood. Barbara Bush was 92 when she passed away On April 17. Former President Bush is 93 years old. He’s been checked into intensive care (via Fox News):

Former President George H.W. Bush was hospitalized on Sunday after an infection he contracted spread to his blood, his spokesman said Monday. The announcement of the hospitalization comes just days after Bush's wife, Barbara, died at age 92.

"President Bush was admitted to Houston Methodist Hospital yesterday morning after contracting an infection that spread to his blood," Bush spokesman Jim McGrath said in a statement. "He is responding to treatments and appears to be recovering. We will issue additional updates as events warrant."

Bush, 93, was hospitalized last April for two weeks due to a "mild case of pneumonia." Earlier in 2017 he was hospitalized for 16 days, also to be treated for pneumonia. He was temporarily placed on a ventilator and was treated in the intensive care unit. His wife was also hospitalized around the same time to treat a case of bronchitis.

Former president George H.W. Bush has been admitted to a hospital in Houston after contracting an infection that spread to his blood. A spokesman says he is responding to treatment now. Mr. Bush's wife, former first lady Barbara Bush, died last week. https://t.co/IyQkqN5GQb pic.twitter.com/V8BIkA3hpi