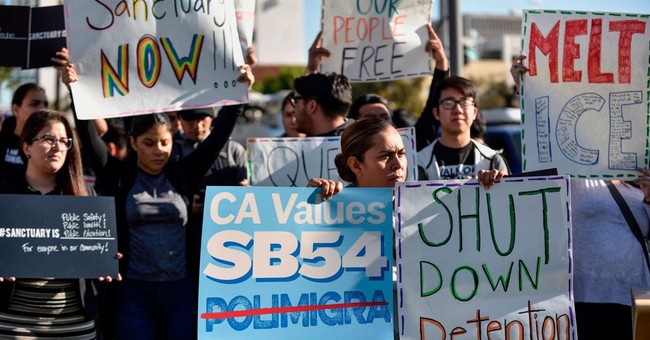 Well, the fight over California’s illegal alien-shielding law is heating up again. The Golden State decided to become a sanctuary state, hampering its local law enforcement entities from detaining or contacting Immigration and Customs Enforcement about criminal illegal aliens. If you come here illegally, you’ve broken the law. Period. Los Alamitos, California has already voted to opt out of the law. In Orange County, the sheriff’s department decided to publicly post the release date of its inmates so ICE could pick up the illegals that were detained.

All of this in the wake of a Department of Justice lawsuit against the state over its law that rightfully argues hampers the execution of the enforcement of federal immigration laws. Democratic Gov. Jerry Brown said in March, that this lawsuit is pretty much an act of war against the state.

Well, Los Alamitos and the Orange County Sheriff’s Department have a new ally, San Diego County, which will join the DOJ’s lawsuit against the state (via Reuters):

San Diego County leaders voted on Tuesday to join the Trump administration’s court challenge to a California law limiting cooperation with federal immigration enforcement, amid a conservative backlash to the so-called sanctuary movement.

The Republican-controlled Board of Supervisors voted to direct the county attorney to file a friend-of-the-court brief supporting the administration’s lawsuit at the first available opportunity, which is likely to be on appeal, board Chair Kristin Gaspar said.

The city council of the tiny Orange County municipality of Los Alamitos went even further on Monday night, approving an ordinance to “exempt” the town of about 12,000 people from the state’s sanctuary law.

The city of San Diego ranks as California’s second-biggest by population, and with the adjacent Mexican city of Tijuana, comprises the largest cross-border metropolitan area shared between the United States and Mexico.

The measure bars state and local authorities from keeping undocumented immigrants who are incarcerated locked up any longer than otherwise necessary for the purpose of allowing U.S. immigration agents to take them into custody. It also prohibits police from routinely inquiring about the immigration status of people detained in an investigation or in traffic stops.

Don Rosenberg is one of the point people for the group Fight Sanctuary State. He’s not a conservative Republican. He’s a liberal who lost his son when an illegal alien ran him over in San Francisco in 2010. In 2013, he wrote a lengthy letter to Gavin Newsom, who is now lieutenant governor, about his tragedy and how this could have happened to his son; Newsom was mayor of San Francisco at the time. He’s still waiting on a response. Newsom is running to succeed Brown in the 2018 gubernatorial election. In the meantime, here’s a 200 second video from Fight Sanctuary State that explains the law. While most illegal aliens who have slipped through the crack want to work hard and build better lives, there’s a right way to do it. At the same time, a lot of them are committing crimes—and these are 100 percent preventable. As the video notes, it’s not anti-immigrant to be anti-crime.

I Will Not Be Silenced!
Townhall
'She's a rockstar': Woman lights up school board over adoption of critical race theory
Twitchy
Jen Psaki Gives Insulting Answer When Asked Why White House Has 'Shifted Tone' on Gas Crisis
Redstate
Adults in the Room: Retired Military Brass Not Afraid to Voice Their Concerns About Biden
PJ Media