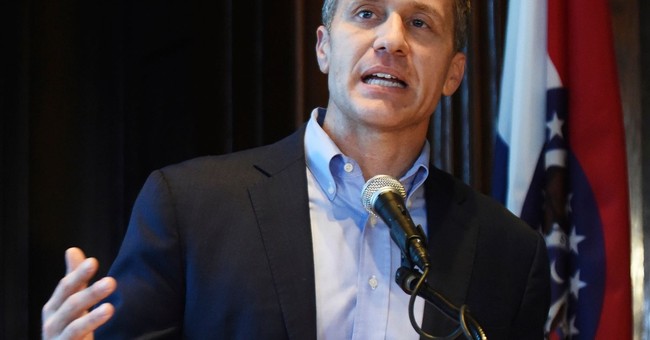 Oh, the Show Me State is set to be one of the most contentious for the 2018 cycle—and its Republican governor could complicate matters for his party in the effort to boot Democratic Sen. Claire McCaskill. Gov. Eric Greitens is fighting for his political life, as he’s facing allegations of sexual misconduct and an indictment on invasion of privacy stemming from an extramarital affair he had running up to his 2016 gubernatorial run. State Attorney General Josh Hawley, who is running for U.S. Senate, said it was time for Greitens to go. Greitens has refused to do so. The 25-page report from a special committee in the state legislature divulged some rather graphic details of this affair. The governor was indicted on invasion of privacy charges in February for taking photos of the woman without her consent and allegedly threatening to blackmail her. The governor’s legal team had tried to make the argument that Greitens’ accuser might have dreamt the whole thing (via Politico):

A woman who had an affair with Missouri Gov. Eric Greitens accuses him of a forced sexual encounter in a graphic report issued Wednesday night by state lawmakers investigating Greitens' conduct.

In sworn testimony, the woman accused Greitens of forcing her into a "bear hug" and putting her on the floor when she attempted to leave his basement in 2015. She testified that Greitens then forced her into oral sex while she was crying "uncontrollably." The woman also told lawmakers that Greitens blindfolded her, tore her shirt open, pulled her pants down, took a photo without her consent, spat in her face and called her "a little whore."

The 25-page report was released by a special committee of the Missouri House of Representatives, which convened to investigate Greitens after he was indicted in February on a charge of invasion of privacy for allegedly taking a nonconsensual nude photo of the woman. The woman's ex-husband has also alleged that Greitens, a Republican in his first term, threatened to blackmail her with the photo.

Greitens has admitted to the affair but denied that he ever tried to blackmail the woman.

Days before the report’s release, Greitens’ defense team filed a motion arguing that Greitens’ accuser might have dreamed that Greitens photographed her with his cellphone. Greitens' lawyers also said that she sent him nude images of herself through FaceTime in 2015.

Hawley has now called on the governor to resign. Via Associated Press the Missouri House Leader also said that the special committee would consider whether or not to impeach the governor over this sex scandal. McCaskill’s team has had fun trying to use it as a lifeboat:

Democratic Sen. Claire McCaskill and her allies have worked to tie Greitens to her likely 2018 opponent, Attorney General Josh Hawley. The Democrats have argued Hawley let Greitens off the hook while investigating his staff’s use of a encrypted text messaging app. Hawley also took a $50,000 donation from the governor during the 2016 campaign.

“All Missourians should worry,” a narrator says in an ad from Senate Majority PAC, which is controlled by allies of Senate Minority Leader Chuck Schumer. “We should be asking ourselves: Is Josh Hawley bought and paid for?”

Hawley has since launched a new investigation into Greitens — this one examining whether he improperly used a donor list assembled by a nonprofit when Greitens was financing his gubernatorial campaign.

Greitens’ allies say that this whole investigation is a witchhunt, but state legislature leaders, both Democratic and Republican, obviously disagree with the notion (KMOV 4):

The Speaker of the Missouri House says he stands by the report issued by a committee investigating alleged wrongdoing by Gov. Eric Greitens.

Speaker Todd Richardson defended the work of the committee saying "this is not a witch hunt" and said the committee had no political agenda.

Richardson said the committee gave Greitens the opportunity to testify.

Richardson also said the committee has voted to continue its work and to provide a recommendation on disciplinary action that could be taken.